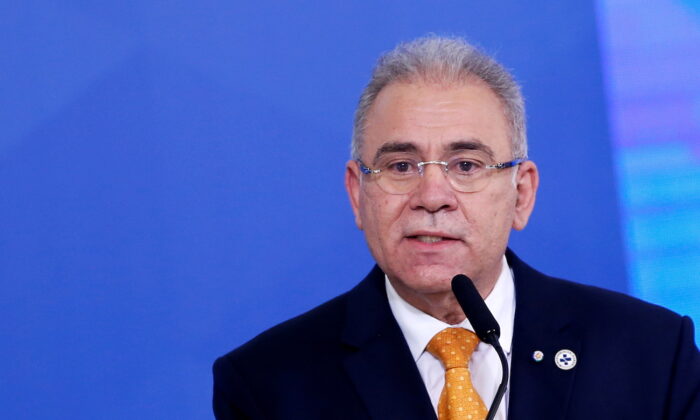 Brazil’s Health Minister Marcelo Queiroga tested positive for COVID-19 while he was in New York City to attend the United Nations General Assembly on Tuesday.

In a statement on Twitter, Queiroga confirmed his positive COVID-19 diagnosis and said that he will be entering quarantine and will follow all health and safety protocols.

Separately, the Brazilian government’s communications office said that Queiroga will remain in New York in quarantine.

Brazil’s health ministry told media outlets that Queiroga is “doing well,” adding that the rest of the delegation accompanying Brazilian President Jair Bolsonaro to the U.N. General Assembly have tested negative for the virus.

Queiroga told CNN Brasil that he was wearing a mask when he was in the U.N. building attending the assembly.

Bolsonaro, the first world leader to speak at the General Assembly on Tuesday, said that he did not support the use of a vaccine passport and asserted that Brazil’s efforts to vaccinate its citizens against the CCP (Chinese Communist Party) virus had been successful.

He added that all adults who want a vaccine would be fully vaccinated by November.

Bolsonaro, who had previously recovered from COVID-19 last July and indicated that he took the anti-malarial hydroxychloroquine as part of early treatment for the virus, said that his government supports early treatment measures.

“We cannot understand why many countries, together with a large portion of the media, took a stance against early treatment measures,” Bolsonaro said. “History and science will certainly be wise enough to hold everyone accountable.”

The Brazilian president praised his government’s handling of the pandemic, condemning lockdown measures while reporting that Brazil has created nearly 1.8 million new job posts in the first seven months of 2021.

“I have always advocated that we should fight the virus and unemployment at the same time and with the same sense of responsibility,” he said.

Bolsonaro, who is unvaccinated, was spotted eating pizza on a Manhattan street with his ministers on Sunday. The city has a COVID-19 vaccine passport mandate effective since mid-August that includes barring unvaccinated people from indoor restaurants.

The health minister was the second member of the Brazilian delegation in New York to have tested positive. A young diplomat who was part of an advance team preparing Bolsonaro’s visit tested positive on the weekend and was isolated.

Li Hai and Reuters contributed to this report.