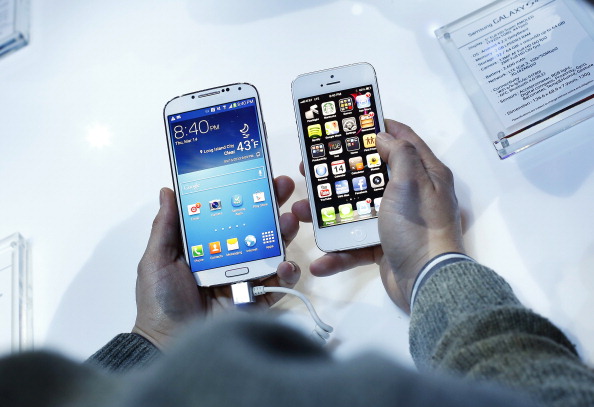 A visitor holds a Samsung Electronics Co. Galaxy S4 smartphone, left, next to an Apple Inc. iPhone 5 during the Galaxy S4 unveiling in New York March 15. Smartphone apps that allow jealous lovers to spy on each other have found many eager subscribers, but also critics who say they violate privacy. (Victor J. Blue/Bloomberg via Getty Images)
International

Tens of thousands of Brazilians downloaded Google’s “Boyfriend Tracker” app before it was taken off the market in response to privacy abuse complaints last week.

“Brazilians are a jealous people, what can I say?” said Marcia Almeida, 47, of Rio. Her marriage ended seven years ago, because, she said, her husband was unfaithful.

The app, downloaded unbeknownst to the partners being tracked on his or her phone, allowed the trackers to check their partners’ location, view their text messages, and even silently force the target phones to call their own to listen in on whatever is going on around the phone.

Such apps are still marketed in the United States and other countries. In the United States, 55 percent of people have spied on their significant others, according to a survey published by dating site SeekingArrangement.com in July.

Brandon Wade, Founder & CEO of SeekingArrangement.com, said in a press release: “Our study shows that surveillance today doesn’t require highly-paid spies or big technology budgets.  More often than not, the act of spying can be performed by anyone—especially someone closest to you.”

A friend of hers tracked her own husband using an iPhone app she had uploaded on a phone she gave him as a gift. Similar to the “Boyfriend Tracker” marketed briefly in Brazil, it allowed her to see his texts, track his location, see the photos he took with the phone, and more.

Bencivenga writes: “The time that she spends online tracking his every move, documenting what he says and to whom, and examining every photo that ends up on his cell phone must be exhausting. She must stay up at night, worrying herself sick about where he could be, what he could be doing. … All of that wasted energy being misdirected to try to catch him in an act that he hasn’t committed. It’s as though she wishes he would give her a reason to be spying on him, to validate her anxiety.”

Her friend told her it helps their marriage, because she is assured of her husband’s faithfulness—though he had not given her specific reasons to doubt it.