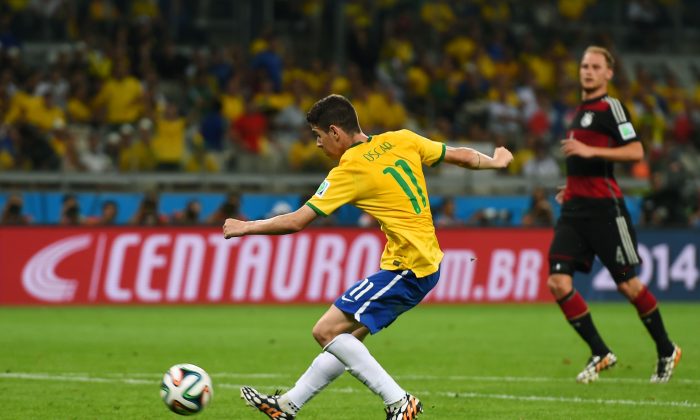 Two referees at the World Cup 2014 have been suspected of match-fixing international games, according to a report on MailOnline.

Sources told the paper that FIFA is looking into the matter and they were informed of it during the current 2014 World Cup.

FIFA normally gathers intelligence from anti-corruption and associations around the world.

According to the Mail, two referees in question have already officiated matches in the World Cup, but it didn’t disclose any names or what matches they officiated.

The paper said it reached out to FIFA about the allegations.

FIFA told the paper: “It is important to note that we have no indications that the integrity of the FIFA World Cup has been compromised.”

At the same time, the organization did not deny that two referees are suspected of match-fixing.

“Generally speaking, we are not in a position to comment or provide information on any match-manipulation investigations that are ongoing so as not to compromise investigations, nor do we provide any comments as to whether or not any investigations are underway,” a FIFA spokesperson was quoted as saying.

FIFA added that any action taken against a corrupt party would be made public afterwards.

“It would be only after a decision has been taken by the Fifa disciplinary committee or Fifa ethics committee and first notified to the parties concerned that Fifa would be in a position to communicate the contents of that decision publicly,” a spokesperson said.

BELO HORIZONTE, Brazil (AP) — It was a humiliating home defeat of record proportions that no Brazilian could have seen coming.

With its defense collapsing early and nobody able to spark the attack, Brazil conceded four goals in a seven-minute span, trailed 5-0 at half time and was routed 7-1 by Germany in the World Cup semifinals on Tuesday.

“We got lost a little bit there,” Brazil’s stand-in captain David Luiz said. Germany “realized the game was there for the taking and scored the goals.

“It’s very difficult to explain right now. The dream is over, in a way that the people didn’t want.”

Brazil’s most heartbreaking World Cup defeat had been a 2-1 loss to Uruguay in the last match of the 1950 World Cup that it hosted. The loss to Germany ranks right up there with that painful defeat.

Fans were in shock, some leaving way before the final whistle.

The Brazilian crowd that had been supporting the national team throughout the tournament jeered loudly after the match, and again when the players raised their hands to applaud them. Luiz kneeled on the ground and prayed, with his arms and index fingers pointed up. Oscar, who scored Brazil’s lone goal, cried near midfield.

“The players knew from the beginning that by playing at home our obligation was to reach the final and win the final,” Brazil coach Luiz Felipe Scolari said.

Home-field advantage wasn’t enough for Brazil again, but not having its top two players available for the semifinal played a major part in the defeat at the Mineirao Stadium. Without suspended captain Thiago Silva and injured star striker Neymar, the Brazilian team appeared rudderless.

Although Silva’s replacement, Dante, was not directly responsible for Germany’s goals, the defense seemed lost from the beginning, giving up space and easy chances to the Germans, who had a 5-0 lead by the 29th minute.

Brazil pressured in the beginning, but the attack never had a chance to keep the hosts in the match. Central forward Fred, one of the most loudly jeered players when he was substituted in the second half, ended the tournament with one goal. No other Brazilian striker — other than Neymar — scored at the tournament. Of the team’s 11 goals, four came from Neymar and 10 from defenders and midfielders.

Neymar was ruled out of the World Cup after fracturing a vertebra late in the 2-1 win against Colombia in the quarterfinals on Friday.

Seven years after winning the bid to host the tournament, the five-time champions already know that they can finish no higher than third place. The playoff — some argue the cruelest of the World Cup matches — is Saturday against the loser of the Netherlands- Argentina semifinal.

It was one of Brazil’s heaviest losses in terms of goals conceded. It had lost 8-4 to Yugoslavia in a friendly in 1934. Tuesday’s result equaled the margin of its previous worst defeat — the 6-0 loss to Uruguay in 1920.

Germany scored the most goals and the biggest margin of victory ever in a World Cup semifinal.