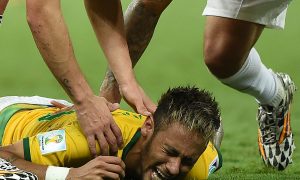 Brazil Fans React: ‘The players don’t do anything; it seems like they don’t love their country’

There’s something not right about this World Cup.

It was meant to be Brazil’s great celebration, banishing the ghosts of 1950 by winning in the Maracana.

Instead, they were outplayed in the 3rd place playoff in Brasilia.

“Hope is the last one to die, so we wanted to see Brazil win even for 3rd place. After the 7-1 loss we at least hoped a win by 1-0, but we didn’t, so lets move forward, and hope Brazilian football changes starting today.”

They lost 3-0 to the Netherlands. Through two games they scored once, and conceded 10 times.

‘The feeling is horrible, sad, but i came because I think we have to support our country above all. I came here to root for them, and hope for victory, but it didn’t happen unfortunately, so I applauded who really played the best.”

Those watching at the fun fest in Rio were just as unimpressed.

“This is a very sad moment, because I expected much more from the team, and it disappointed us a lot, because Brazilian football should not shame us like that. The players don’t do anything; it seems like they don’t love their country.”

That will be tough to hear from Brazil players, who were in tears whenever the national anthem was played.

You need more than passionate singing to win a World Cup though.