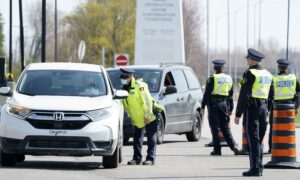 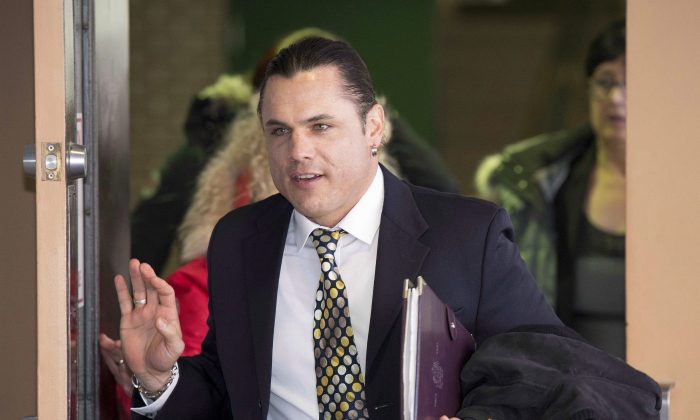 Suspended senator Patrick Brazeau returns to the Gatineau Courthouse on March 23, 2015, following a break during his trial for allegations of assault and sexual assault from an incident in 2013. (The Canadian Press/Justin Tang)
Canada

GATINEAU, Que.—Patrick Brazeau’s defence team is suggesting the Crown’s key witness instigated a physical confrontation that led to the suspended senator’s arrest when she hit him with her hand and with a bra, a criminal trial heard Wednesday.

During cross-examination, the complainant in Brazeau’s assault and sexual assault trial denied the lawyer’s suggestion that she struck Brazeau when he demanded she return a necklace he had given to her as a gift.

“That’s false,” the woman, whose identity is protected by a publication ban, said through an interpreter while on the stand.

Brazeau’s trial in Gatineau, Que., entered its third day Wednesday, March 25. He is facing charges arising from an alleged incident two years ago at a residence in the city, north of Ottawa.

The court has seen several police photos showing bruises and red marks on different parts of the woman’s body.

The woman, who was on the stand for the third straight day, has alleged Brazeau pushed her down some stairs, spat in her face, forcefully grabbed her breast, and sexually assaulted her.

Brazeau, who was kicked out of the Conservative caucus after his arrest, has pleaded not guilty to the charges.

His attorney, Gerard Larocque, continued to challenge the alleged victim’s credibility Wednesday, saying she kept authorities in the dark about some details of the February 2013 incident.

Larocque alleged she had never mentioned in interviews and statements about how the animal-print bra and a purple shirt—both of which had been in her hands at the start of confrontation—ended up on a flight of stairs during the altercation.

On Tuesday, his questions forced her to acknowledge in court that she ripped the necklace off her own neck during the incident and threw it—details she never reported in statements to authorities.
She alleged she yanked off the necklace in anger after Brazeau pushed her to the ground.

The lawyer also targeted her credibility by telling the court how she once used a fake passport to travel to Canada. She testified, however, that she was up front with Canadian customs officials about the passport as soon as she arrived in the country to declare refugee status.

The woman acknowledged travelling to a third country from her native country to obtain a fake document, so she could then travel to Canada.

On Tuesday, the woman shed tears as she listened to her own panicked voice on 911 emergency telephone recordings that were played in the courtroom. The court has seen several police photos showing bruises and red marks on different parts of the woman’s body.

The trial by judge alone is expected to continue past Wednesday, but the next court date has yet to be scheduled.

Brazeau’s legal troubles will be far from over, however. The 40-year-old still faces charges of fraud and breach of trust in connection with his Senate expense claims.

Last year, the Senate ordered Brazeau to repay almost $50,000 over disputed expense claims. He refused and the Senate garnisheed his salary until November 2013, when he was suspended without pay.

In another case, Brazeau faces charges related to allegedly being behind the wheel of a car while impaired in October, and for possessing a weapon in breach of his bail conditions.