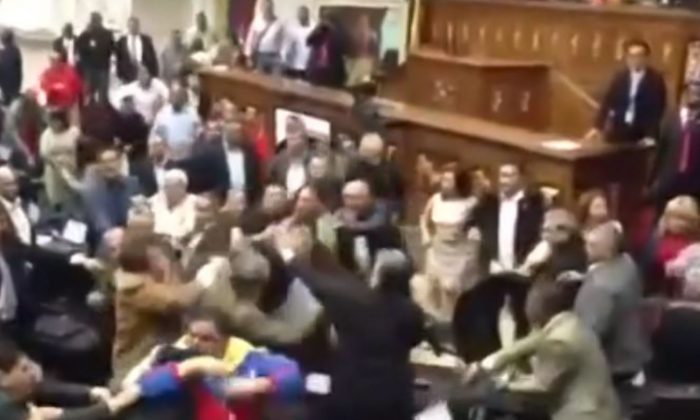 A brawl brakes out in Venezuela Parliament on April 30, 2013. (Screenshot via The Epoch Times)
Americas

A brawl broke out in Venezuela’s parliament on April 30 after MPs were banned from speaking until they recognised the new President.

A video shows several people involved in a rolling punch-up that left several bruised and injured.

The violence stems from a dispute over the Presidential election on Monday, which resulted in Nicolas Maduro beating Henrique Capriles by a narrow margin.

The opposition’s calls for a recount were rebuffed, and a motion was passed denying MPs the right to speak until they accepted Maduro as President.

On Tuesday, the opposition said they had been physically attacked in Parliament.

“They can beat us, jail us, kill us, but we will not sell out our principles,” Mr Borges was quoted as saying by the BBC.

“These blows give us more strength.”

But supporters of the government blame the opposition for starting the violence.

Later, a video was posted to Youtube by AP, which shows the outbreak of violence in the National Assembly.