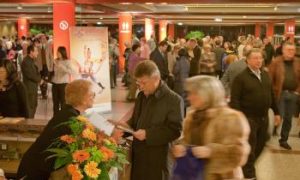 WASHINGTON—The nation’s capital was host to a grand parade and dynamic display of patriotism by the Boy Scouts of America, its affiliated groups, and other civic organizations, marking the centennial year of the group’s founding.

The parade traveled down Constitution Avenue from 7th to 18th streets, covering a mile. The event was the culmination of a week of group activities with thousands participating.

In spite of a sweltering heat wave blanketing the Eastern Seaboard, a receptive audience of thousands lined the parade route. Upon the parade’s conclusion, a brief shower with breezes and clouds provided cooling relief downtown.

The Boy Scouts of America was founded in 1910 with its stated purpose being to “teach patriotism … courage, self-reliance and kindred values.” Its motto, “Be Prepared,” harmonizes with its core values: to be “trustworthy, loyal, helpful, friendly, courteous, kind, obedient, cheerful, thrifty, brave, clean and reverent.”

Many former Boy Scouts have gone on to play key leadership roles in society.