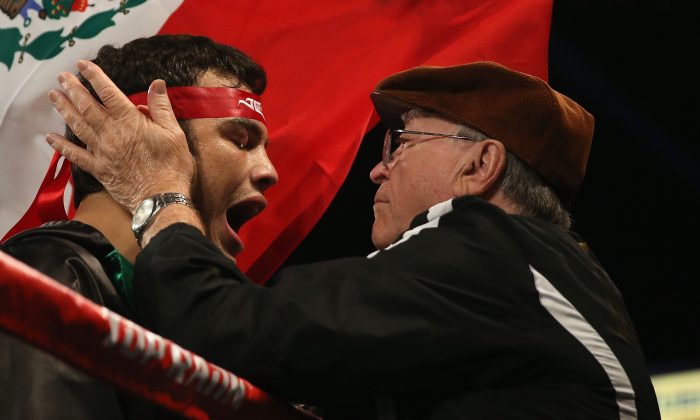 Cesar Chavez Jr. (L) is and his cut man Miguel Diaz prior to the start of his Light Heavyweight bout against Brian Vera at StubHub Center on Sept. 28, 2013 in Los Angeles, California. (Jeff Gross/Getty Images)
Crime and Incidents

Investigators said that an up-and-coming young boxer died in a crash in Palmdale, California, on Friday, Nov. 24.

Cesar Diaz, a bantamweight prospect who signed with Oscar de la Hoya’s Golden Boy Promotions in 2016, lost control of his vehicle as he was driving and crashed into a tree around 8 p.m., police said.

He was ejected from the vehicle and pronounced dead at the scene of the crash, officials told ABC7. His girlfriend, who was also in the car, was hospitalized.

“Everyone at Golden Boy Promotions is heartbroken over the passing of Cesar Diaz over Thanksgiving weekend,” Golden Boy Promotions said in a statement on Facebook. “As talented and aggressive as he was in the ring, anyone who met Cesar knew how kind and nice he was outside of it. Our thoughts and prayers are with Cesar’s girlfriend, who remains in critical condition, and his entire family.”

Diaz, who born in Mexico before relocating to Palmdale with his family as a child, began boxing at age 9. He was told by his parents that he wasn’t going to be allowed to sit around the house after school and that he would have to pick a sport to participate in. His choices were boxing or karate, and there were gyms for each sport on the same street near where he lived.

After a week in the boxing gym, Diaz was sold.

Tragic news as Cesar Diaz passes away in a car accident . Our deepest condolences to family & friends and @GoldenBoyBoxing . Rest In Peace pic.twitter.com/GOl1llwHDq

R.I.P. Cesar Diaz. My condolences to his family and #TeamDiaz. pic.twitter.com/59YUM704Se

It’s unclear why Diaz lost control of his car.

Those with information on the accident can call the Los Angeles County Sheriff’s Office Palmdale station at 661-272-2400.

Dear reader, we have a little favor to ask of you. We work hard to deliver important and interesting articles, but we can’t do without your help.