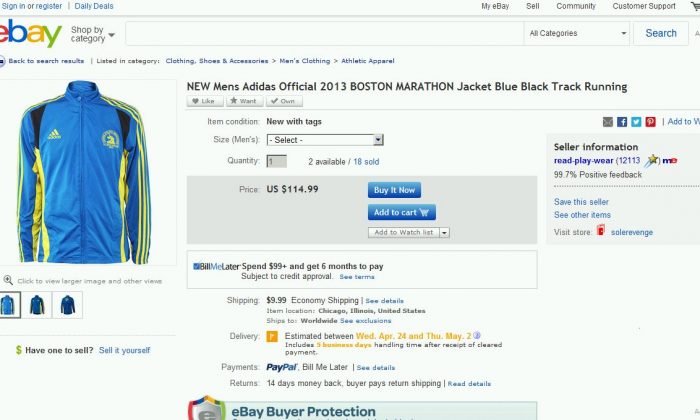 A screenshot of eBay shows a 2013 Boston Marathon jacket being sold.
US

Boston looting: A video that purportedly shows people looting jackets after the Boston Marathon explosions that left three dead and scores injured drew condemnation, questions, but some netizens said it was unlikely people in the video were looting. At the same time, memorabilia from the Boston Marathon showed up on eBay, including a jacket.

The news of the eBay postings come after a YouTube user uploaded a video, claiming that people were looting in the aftermath of the bombing. However, a number of Internet users were quick to point out that it appeared that people were simply doling out Boston Marathon jackets to people affected by the tragedy.

“These were not ‘looters.’ The [Boston Marathon] organizers dropped the boxes off and told people to take them. Their idea was that it would help with the cold and at that point…no one cared about cost,” said one user on Reddit after the “looting” video was posted there.

“I WAS THERE. THEY WERE GIVING THEM AWAY to comfort injured or those who could not go back to hotel. The guy whom you can see carrying the boxes brought them to us. Yes, some people took advantage of? it, what can you do, but it’s not looting what you see,” another user commented.

A brand new Boston Marathon jacket appeared on eBay on Tuesday, with a listing price of $114.99, but it is unclear if the jacket was handed out or if it was given to the eBay user.

“The memories are priceless the momentos are not. So far I’ve made enough to cover my entry fee for next year,” one user, who hosted an auction, told the Post.

There was also a Boston Globe newspaper that shows the aftermath of the explosion listed at $9.99.

“Out of respect for victims, eBay does not allow listings that graphically portray, glorify or attempt to profit from human tragedy or suffering. eBay’s teams are monitoring related listings to ensure they comply with our policies and also taking into account reports from our community members,” eBay said in a statement to the Post.