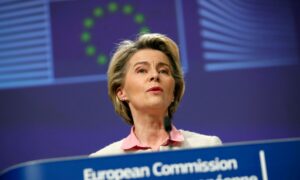 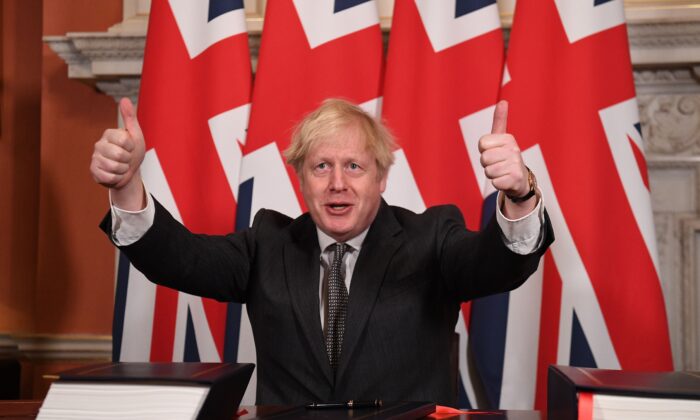 Britain's Prime Minister Boris Johnson gives a double thumbs up after signing the Trade and Cooperation Agreement between the UK and the EU, the Brexit trade deal, at 10 Downing Street in central London on Dec. 30, 2020. (Leon Neal/Pool/AFP via Getty Images)
UK

British Prime Minister Boris Johnson signed the UK–EU agreement on post-Brexit trade and cooperation on Dec. 30, after it got parliamentary approval.

“I want everybody to understand that the treaty that I’ve just signed is not the end, it is a new beginning, and I think the beginning of what will be a wonderful relationship between the UK and our friends and partners in the European Union,” he said after signing the document.

By signing this deal, we fulfill the sovereign wish of the British people to live under their own laws, made by their own elected Parliament. pic.twitter.com/FQDj1Nnqan

“It’s an excellent deal for this country but also for our friends and partners,” he said.

The 1,240-page agreement was signed by European Commission President Ursula von der Leyen and European Council President Charles Michel on Wednesday morning, and was then flown to London by a Royal Air Force plane to be signed by the UK leader.

Earlier in the afternoon, the EU (Future Relationship) Bill, which brings the deal into UK law, was overwhelmingly approved by the House of Commons, with 521 MPs voting for the bill and only 73 voting against it.

Before the Commons vote, Johnson urged Parliament to back the deal, saying it will resolve the “vexed question” of Britain’s relations with Europe.

Later, while talking to the BBC, Johnson called the Brexit trade agreement “a cakeist treaty.” Britain can now “have our cake and eat it,” he said, because it can free trade with the EU without having to conform with EU laws.

But he admitted that diverging from EU laws may lead to tariffs being applied to UK exports.

“If we feel that one side or the other is undercutting the other through their approach, and you can prove that over six months, you can prove the detriment to an independent arbitrator, then the other side can apply tariffs,” he said.

But he said he had “no problem with that,” because it would be a “sovereign decision” of either side to do it.

While the deal provides for tariff-free trade in goods, it does not cover Britain’s much larger and influential finance sector.

Britain’s main opposition Labour Party voted for the deal, but said it did so only to prevent a no-deal Brexit.

Labour Party leader Keir Starmer said the deal is a “thin agreement” which does not provide adequate protection to British businesses and workers.