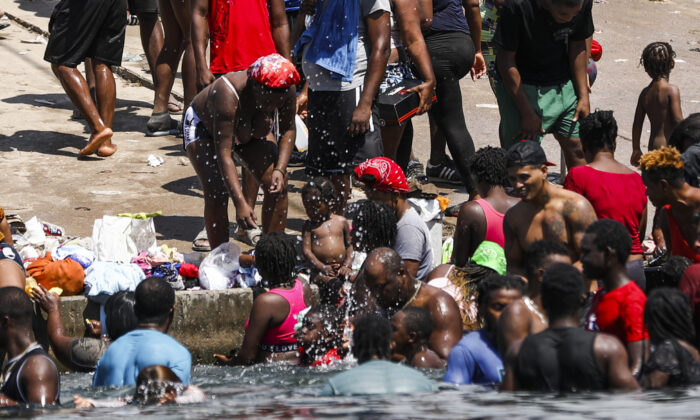 Illegal immigrants bathe and play on the U.S. side of the Rio Grande, the international boundary with Mexico, in Del Rio, Texas, on Sept. 18, 2021. (Charlotte Cuthbertson/The Epoch Times)
National Security

Border Patrol: Despite Mayorkas’ Claims, 60 Percent of Migrants Being Released Into U.S. Communities

Despite claims made by Department of Homeland Security Secretary Alejandro Mayorkas, the majority of those entering the U.S. illegally are not being deported by U.S. Immigration and Customs Enforcement (ICE), the head of the Border Patrol union, Brandon Judd, told The Center Square.

Mayorkas, who traveled to Del Rio, Texas, where nearly 15,000 Haitian migrants gathered this past week, warned illegal immigrants at a news conference, “If you come to the United States illegally, you will be returned, your journey will not succeed, and you will be endangering your life and your family’s life.”

Likewise, the Department of Homeland Security said in a statement that DHS, Border Patrol, ICE, and the U.S. Coast Guard were moving individuals from Del Rio to other processing locations in order to take individuals into custody, process them and remove them from the country.

It added that DHS was securing additional transportation to accelerate the pace and increase the capacity of removal flights to Haiti and other destinations in the hemisphere within the next 72 hours. But the agency hasn’t confirmed how many flights, and how many Haitians have been deported.

A few days later, at another news conference in Del Rio on Tuesday, Texas Gov. Greg Abbott, when asked about the Biden administration’s deportation flight plans, said, “They have shown no capability of being able to process these migrants by the end of this week. The only thing they’ve shown is an incapability of dealing with this crisis, candidly, in a way they pretend it doesn’t even exist. And we’re here to tell you it exists.”

The Associated Press reported that Haitians have been released on a “very, very large scale” in recent days, with one official estimating the number of those releases is in the thousands.

“The first three [deportation] flights that went to Haiti included family units” who were deported, Judd said. But deportations are on a case-by-case basis, he added, and inconsistent.

For example, “if the flights focus on deporting people to Haiti, the flights to Guatemala stop and those people are released,” he said. “So, all you’re doing is robbing Peter to pay Paul. You’re shifting resources to handle one segment and you’re releasing the other segment. Not all the people from Haiti are being flown back; not all the people are being expelled from under Title 42. A good number of them are in fact being released with an NTA (Notice to Appear) or NTR (Notice to Return),” notices related to the immigration court process.

Border Patrol agents make official arrests and transfer individuals to ICE facilities. ICE then determines whether they are released with an order to reappear for court hearings to go through the process to remain in the U.S. or be deported.

Haitians already processed and released into the community were observed boarding buses at the Val Verde Border Humanitarian Coalition in Del Rio. Roughly 50-60 Haitians at a time boarded a large commercial charter bus, and smaller groups were shuttled in a grey rundown minivan to the local bus station. With brown envelopes in hand, a mix of families and individuals also carried with them food, cash and papers to help them reach their next destination.

When asked where the bus was going, the first stop was San Antonio, with a final destination of Houston, The Center Square was told. Officials wouldn’t confirm if the Haitians were boarding planes to another destination or if San Antonio or Houston were their final destinations. This group of Haitians had already been processed by Border Patrol and released into the general population.

Meanwhile, a steady flow of people continued to cross the Rio Grand River farther upstream from the bridge, crossing onto private property on a heavily trafficked area on Vega Verde, where Texas Department of Public Safety officers were waiting to detain them and call Border Patrol for pickup.

DHS has also been busing Haitians to El Paso, Laredo, and cities in the Rio Grande Valley for processing, also adding them to flights to Tucson, Arizona, the Associated Press reported.

Judd said of the roughly 200,000 apprehensions that Border Patrol makes, “they are probably dealing with 120,000 people because sometimes the same person or people are apprehended more than once. Of those, it’s right about 60-68 percent are being released [into the community] with NTAs. The vast majority are not being expelled or deported. The majority are being released into the United States.”

When asked if this ratio applied to Haitians under the Del Rio Bridge, he said, “If we go off, historically speaking, the majority of the ones under the bridge will be released.”

But this number can shift depending on which segment of the population ICE chooses to deport, he added. ICE “can say we’re going to send all the Haitians back but then we’re going to release all the other people from another country. Or we can release the Haitians.”

In response to being asked if there’s consistency in this process, he replied, “Zero consistency.”