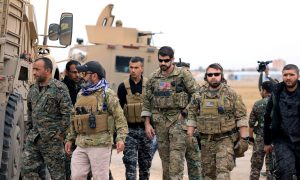 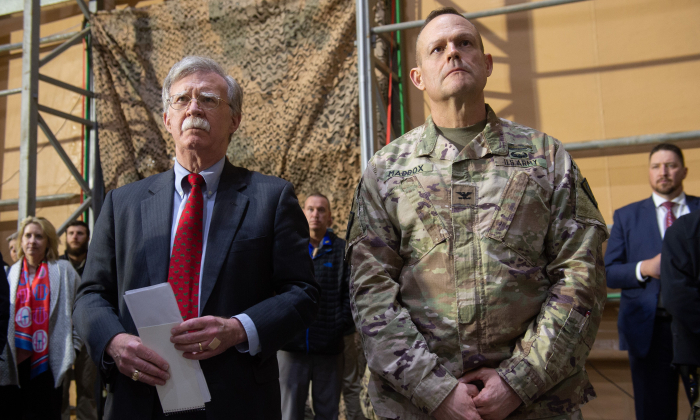 US National Security Adviser John Bolton (L) listens as US President Donald Trump speaks to members of the US military during an unannounced trip to Al Asad Air Base in Iraq on Dec. 26, 2018. (Saul Loeb/AFP/Getty Images)
World

Bolton Says US Withdrawal From Syria Conditional on Protection for Kurds

The U.S. military withdrawal from Syria includes a requirement that Turkey may not attack Kurdish troops in the region, national security adviser John Bolton told reporters in Jerusalem on Jan. 6.

Bolton detailed the condition, which hadn’t been previously disclosed, in a briefing with the press during a four-day trip to Israel and Turkey. President Donald Trump ordered U.S. troops out of Syria last month but didn’t provide a timeline.

The exit of U.S. troops from the region opened the possibility that Turkey would attack Kurdish fighters in northern Syria, whom Ankara considers an enemy. Bolton told reporters he would stress in his talks with Turkish officials, including President Recep Tayyip Erdogan, that the Kurds must be protected.

“We don’t think the Turks ought to undertake military action that’s not fully coordinated with and agreed to by the United States at a minimum so they don’t endanger our troops, but also so that they meet the president’s requirement that the Syrian opposition forces that have fought with us are not endangered,” Bolton said ahead of talks with Israeli officials.

Bolton, who will travel to Turkey on Jan. 7, said that Trump’s position is that Turkey may not kill the Kurds and that the U.S. withdrawal is conditional on an agreement on the matter.

Bolton also said that the withdrawal would be carried out in a manner that would “make sure that the defense of Israel and our other friends in the region is absolutely assured, and to take care of those who have fought with us against ISIS and other terrorist groups.”

Secretary of State Mike Pompeo also will travel to the Middle East in the coming days, primarily to assure allies in the region that the U.S. pullout from Syria doesn’t mean that Washington is leaving the Middle East.

“Despite reports to the contrary and false narratives surrounding the Syria decision, we are not going anywhere,” a senior State Department officials told reporters in a background call. “The secretary will reinforce that commitment to the region and our partners.”

According to Trump, U.S. troops should return home because the international alliance in Syria had decimated the ISIS terrorist group. The president didn’t provide a timeline, but said the withdrawal would take place “over a period of time,” rather than quickly. He also said the United States wanted to protect the Kurds, who have been vital to the U.S. campaign against ISIS.

Trump campaigned on a promise to bring American troops home from the Middle East. The withdrawal from Syria is the first major exit from the region during his tenure. According to The Wall Street Journal, Trump has also ordered the withdrawal of half of the U.S. forces in Afghanistan.

“We have endless wars. They’ve been going on for 19 years in the area. But I’m going to bring them home from Syria,” Trump said Jan. 2.

Syrian Kurdish leaders are aiming to secure a Russian-mediated political deal with Syrian President Bashar al-Assad’s government, regardless of U.S. plans to withdraw from their region, a senior Kurdish official told Reuters.

The Kurdish-led administration that runs much of northern Syria presented a roadmap for an agreement with Assad during recent meetings in Russia. Badran Jia Kurd, a meeting attendee, said the administration is awaiting Moscow’s response.

If such a deal could be accepted, it would piece back together the two biggest chunks of Syria, a country splintered by eight years of war, and would leave one corner of the northwest in the hands of anti-Assad rebels backed by Turkey.

The immediate priority for the Kurdish leaders is to find a way to shield the region from Turkey, which views the Kurdish YPG militia as a national security threat.

Turkey has already sent its army into Syria twice to roll back the YPG. But it has held off attacking the large Kurdish-controlled area of the northeast, where U.S. forces operate.

In remarks that emerged after Bolton’s comments, Ibrahim Kalin, the spokesman for the Turkish president, said that Ankara’s targets in Syria were the YPG, the PKK, and the ISIS terrorist group.

“One aim of Turkey’s fight against the PKK and its Syrian extensions is to rescue the Kurds from the cruelty and oppression of this terrorist group,” Kalin said, according to state-owned Anadolu news agency.

“Turkey will continue decisively its efforts to end the war, provide security, and implement the process of political transition, without discriminating between our Syrian brothers on the basis of religion, ethnicity or sect,” Kalin said.