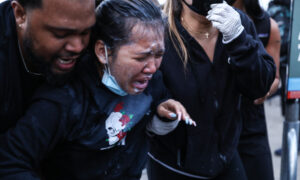 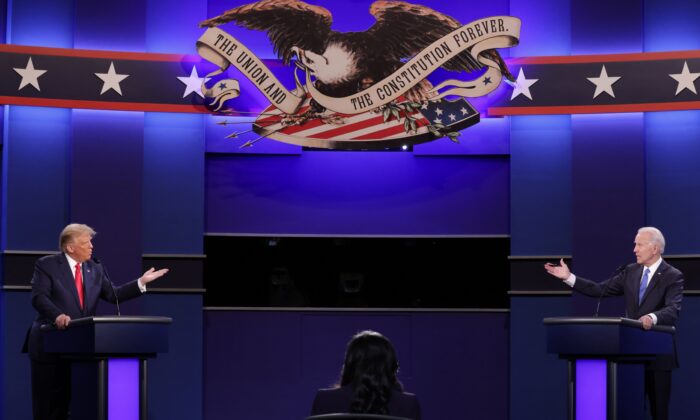 That was the way many people, including myself, regarded, in advance, the Oct. 22 supposedly third, but actually second, debate between President Donald Trump and former Vice President Joe Biden.

Lined up against the current president was not only his adversary Biden and the moderator, whose partisanship was so well-documented she might as well have been communications director for the Democratic Party, but the entire Commission on Presidential Debates that consisted of three co-chairs, a nine-person board of directors, and an executive director—that’s 15 to one!—not to mention a monolithically left-leaning mainstream media and, worst of all, the gatekeepers of our (and the world’s) now extraordinarily dominant social media, who have shown an allegiance to censorship straight out of the NKVD (an earlier incarnation of the Soviet KGB).

Also, foreign policy, normally the topic of the third debate, was AWOL, most likely to protect Biden, for whom the subject is a liability if one were to believe former Defense Secretary Robert Gates, who said Biden had not been right “on any major foreign policy issue in 40 years.”

Trump has had numerous foreign policy successes, most recently and spectacularly in the Middle East.

But Trump had, excuse the redundancy, a trump card against this tidal wave of bias, inviting to the debate Tony Bobulinski, Hunter Biden’s business partner who had the temerity to inform the American public about the nature of the Biden family business—or the Biden Crime Family, as Trump calls it.

And then two hours before the debate, Bobulinski himself, a Navy veteran and a Democrat, gave a surprise press conference and made a statement that was like rolling a hand grenade into the debate. He made it clear—specifying date and location—that he personally had been in a meeting with Joe and Hunter Biden to discuss their business dealings with the Chinese—in effect that Joe Biden had lied to America.

He had more, implying the Bidens were indeed a crime family with international connections that could endanger our national security. Then he offered three cellphones to the FBI as evidence.

Incredibly—or maybe not so incredibly at this point—this press conference was covered only by Fox News, and not CNN, MSNBC, or the three networks where omertà ruled.

Like it or not—and I guess a fair number of people do like it, frightening as that is—the logical conclusion from that kind of censorship is that we live in a kind of post-modern media dictatorship that not even Orwell or Huxley could have dreamed up.

Bobulinski’s dramatic revelations were certainly heartening to Trump supporters, yet disturbing at the same time. How would this play out? Would this also be deep-sixed?

One of the mysteries that was plaguing me in the time between Bobulinski’s press conference and the actual debate was the role of the FBI—again.

Supposedly, we also suddenly learned, they had been examining the very laptop and hard drive Hunter had left behind months ago as part of a money-laundering investigation about which, to date, we have heard nothing.

Was the FBI covering up, as they did with the Trump–Russia investigation—again? Christopher Wray, needless to say, isn’t talking. (Where, oh where, is Bill Barr?)

As for the debate itself, well, after this it was a bit of an afterthought. A number of pundits praised it as substantive, but I thought it was rather ho-hum. It wasn’t quite a “tale told by an idiot,” as Macbeth famously intoned, but it was ”full of sound and fury, signifying nothing.”

In other words, it wasn’t much of a debate because we learned little of the candidates that we didn’t already know if we were paying attention to the campaign. It was a bit more civil than the first one, but big deal. The moderator, NBC’s Kristen Welker, was slightly more even-handed than Fox’s Chris Wallace, but, as Annie Hall would put it, la-dee-da.

Regarding the criminal accusations, Trump brought them up, but not to as much effect as he could have. He got lost, I felt, in defense of his taxes again, which he should have blown off.

But all of this was finally vastly upstaged by Bobulinski’s press conference, which contained information we didn’t know, and which should be investigated thoroughly for the good of our country.

But will it, and if so, will it be too late?

Think about this: Biden wins the election and then, proof of all this corruption comes tumbling out. Happy days are here again … in Beijing.