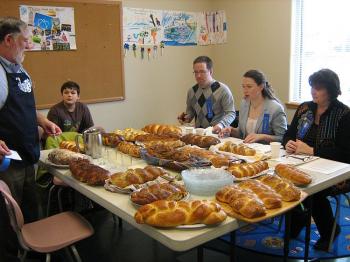 By lisa.wederspahn
Print
OLYMPIA, Wash.—Jewish people believe in playing a positive role in the world, making it a better place by caring for those in need, and helping their neighbors.

One of the ways that the local Jewish community does this, according to Rabbi Seth Goldstein of Temple Beth Hatfiloh is through their annual Blintzapalooza. For 23 years the group has held a contest for best baked item. The festival features breads and blintzes, bagels and kugel, and the proceeds go to charities.

Linda Blustein, one of the event organizers, said Blintzapalooza, held each spring, is a way to “demystify the Jewish community … to see what we do, [and] taste some food from our culture.”

The subject of the contest differs from year to year. This time challah was the star. Challah is traditional soft braided Jewish bread, slightly sweet, made with a large number of eggs. The dough is made to rise twice.

Every year the group chooses different nonprofits to help. The Olympia Free Clinic, the Out of the Woods Shelter, and a dispute resolution center benefited from the 2011 fundraiser.

The event is a way to help build bridges between the local Jewish people and the majority. Compared to other places in the United States such as the East coast, Olympia has a tiny Jewish population of only a few hundred people.

Nancy Koppelman, a challah baking contestant who is originally from New York, described herself as a minority as a Jew in the Pacific Northwest. She uses her best friend's recipe, and has been making it for 20 years. Koppelman looks forward to the event every year, she said. “It's a lighthearted, fun celebration of Jewish traditional food and a way to give back to the community.”