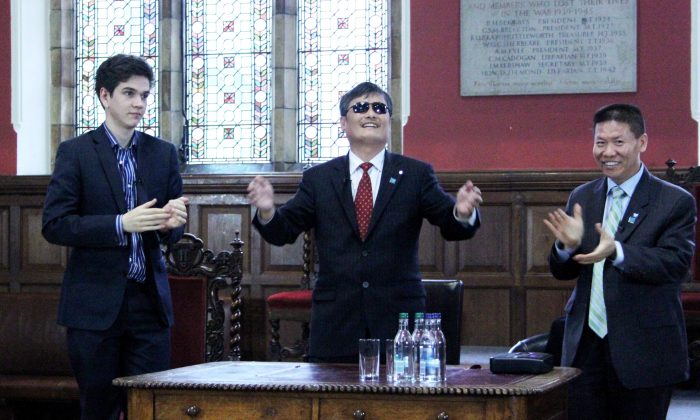 Chen Guangcheng (center), with an Oxford student (left) and Bob Fu, head of rights group China Aid, at Oxford Union on May 21. Chen told the crowd of roughly 200 that the West lacked courage in dealing with the Chinese Communist Party. (Li Jingxing/The Epoch Times)
Chen Guangcheng

Blind Dissident Chen Guangcheng Given Award, and a Warning

After short and rousing Oxford speech upon his receipt of the Westminster Award, Chen Guangcheng was scolded by Beijing
By Matthew Robertson

Chinese dissident Chen Guangcheng just finished touring England, where he received an award in the British Parliament for his human rights efforts and gave a speech to students at Oxford University lamenting the lack of courage of the West in dealing with the Chinese Communist Party on human rights issues.

In a possible attempt to head off Chen making similarly robust statements when he visits Taiwan next month, the Chinese foreign ministry spokesperson, Hong Lei, on May 23 stated that: “As a Chinese citizen, on his activities overseas he should know how to protect the country’s dignity and fulfil his responsibilities as a citizen,” in response to a question about Chen’s Taiwan trip, according to Reuters. Hong’s remarks were not available on the Ministry’s website.

The jab will probably not deter Chen, who on May 21 told students at Oxford Union, the university’s well-known debating society, that the Party has “lost legitimacy, lost righteousness, and lost any legal basis on which to support its dictatorial regime. The Party is nothing to fear. They’re water without a source.”

It is the failure of Western countries to grasp the attenuated position of the ruling communists that frustrated Chen, his remarks indicated.

“In the last few years, Chinese people have had a rapid awakening that they are citizens, and this sense is getting stronger and stronger,” he said. “The Communist Party is sitting on pins and needles — but the outside world doesn’t have a sufficient grasp of this.”

He cited the fact that spending on domestic security, to put down protests, dispatch secret police, and maintain ever more complex high-tech surveillance networks, cost the regime over $111 billion in 2012, more than it spent on the military. “They are extremely, extremely panic-stricken,” he said.

Chen’s own family has suffered harsh retaliation for his activism. His nephew, Chen Kegui, is currently imprisoned and has been denied medical care for acute appendicitis by the authorities. His brother, Chen Guangfu, has been beaten and suffered other forms of harassment in his village. Other family members are under surveillance.

It was against this background that he remarked with disappointment on the “closed door” approach to human rights discussions that most Western countries now use to engage with Beijing. “This should change, or it’s meaningless,” he said, according to Radio Free Asia.

Western democracies have been too short term in their thinking, too easily lured by the promise of economic benefit, and have compromised on their principles, Chen said.

A number of the Chinese media present at the events asked about Chen’s plans during his visit to Taiwan next month; he acknowledged that he’s going to give a speech to the Legislative Yuan there saying that human rights are the basis of peace in cross-strait relations, and added that “they’re not just the basis of peace there, but the basis of coexistence for mankind.” The biggest threat to humankind is dictatorship, he said.

The day previously, on May 20, Chen was given the Westminster Award for Human Life, Human Rights and Human Dignity, which takes the form of an engraved silver latter, in the British Parliament. About 100 people were present at the event sponsored by Conservative legislator Fiona Bruce.

“Chen must rank as one of the great men of this generation,” said Lord Alton of Liverpool, also a supporter of human rights, and the man that invited Chen to London. “He loves his country and its people. One day he will be celebrated in China as a national hero who bravely stood against the system and paid a heavy price for doing so”.

With reporting by Li Jingxing.