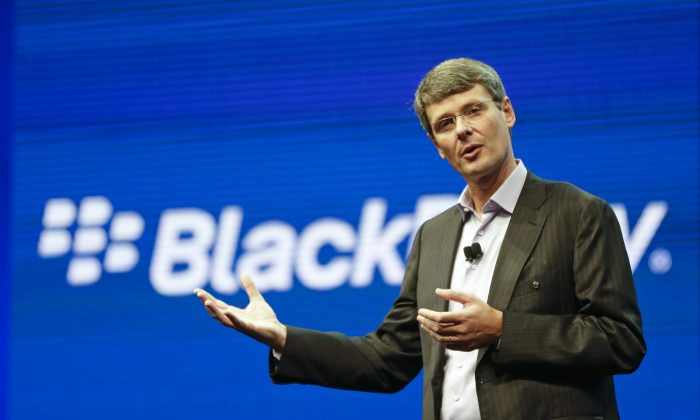 Company to focus on enterprise and software
By Catherine Yang

BlackBerry announced CEO Thorsten Heins’ resignation Nov. 4, as a deal with investment company Fairfax to take it private fell through. The company will instead raise $1 billion and focus on internal restructuring.

“BlackBerry is an iconic brand with enormous potential–but it’s going to take time, discipline and tough decisions to reclaim our success,” stated John Chen, newly appointed executive chair of the board and interim CEO. “I look forward to leading BlackBerry in its turnaround and business model transformation for the benefit of all of its constituencies, including its customers, shareholders and employees.”

Chen, former SyBase Inc. CEO, will be responsible for reorganizing the goals and strategy of the company, according to a BlackBerry release.

While it’s unlikely BlackBerry could succeed in or would pursue becoming a large handset maker again, IHS analyst Daniel Gleeson says the hiring of Chen brings up an interesting question of what BlackBerry is trying to become.

Chen had turned around an ailing SyBase which, similar to BlackBerry, was an enterprise services business with a strong emphasis on mobility. BlackBerry is now trying to switch focus on enterprise instead of mainstream consumers.

“The problem for Blackberry is that … large enterprise customers place high value on stability when investing in their IT systems,” Gleeson wrote in an email. “The continuing uncertainty over Blackberry’s future direction will doubtlessly at the very least delay some purchase decisions.”

Enterprise has always been BlackBerry’s core business, but now there is more competition.

“They got into the consumer business almost by accident,” says Frost and Sullivan analyst Ronald Gruia. BlackBerry’s strength in security is still appealing to companies, Gruia says, and “I think with [restructuring] in two or three years they could be really viable.”

However, Chen told Reuters on Monday the company did not have any plans to shut down its handset business.

Heins, who is stepping down with immediate effect, had moved from COO to CEO at BlackBerry in January 2012. He oversaw the launch of a handful of new phones (BlackBerry 10, Q10, Z10, and Z30) but couldn’t stem the cash drain in the handset division.

Since Heins is resigning of his own accord, “no severance amounts will be payable.”

Earlier this year, Fairfax Financial Holdings Ltd. bid $4.7 billion or $9 per share to take BlackBerry Ltd. private after the company put itself up for sale in Aug.

“We did the due diligence … and our conclusion was that a leveraged buyout with high-yield debt and at high interest rates was not appropriate for this company,” Fairfax head Prem Watsa told Reuters on Monday.

Fairfax, which is already the company’s largest shareholder, will take up $250 million of the $1 billion convertible bond issue. The transaction is expected to be completed within two weeks.

Fairfax CEO Prem Watsa had stepped down from the board to work out the deal and will be re-appointed Lead Director and chair of compensation.

“Fairfax is a long-time supporter, investor and partner to BlackBerry and, with this investment, reinforces its deep commitment to the future success of this company,” Watsa stated.

Barbara Stymiest, chair of BlackBerry’s board, stated the announcement was a vote of confidence from their investors.

“Some of the most important customers in the world rely on BlackBerry and we are implementing the changes necessary to strengthen the company and ensure we remain a strong and innovative partner for their needs,” Stymiest stated.

The company’s stock price dropped as much as 16 percent to $6.5 in New York trading when the news hit Monday morning, but some analysts are looking at the immediate cash injection as a positive step.

Going private would have given the company room to undergo ample restructuring, Gartner analyst Carolina Milanesi said, but if the new financing and CEO can provide positive change, that would be just as well.

“Hardware might still be offered but it will not be the key asset of the company going forward and so it should be,” Milanesi wrote in an email.

“I know [it] seems counterintuitive if we look at vendors that have been in the software business now getting into hardware [Microsoft],” Milanesi wrote. “But the way these vendors do hardware is to demonstrate software and services and engage users at an overall ecosystem level. Blackberry was not being successful in trying that route and has to take a new approach.”