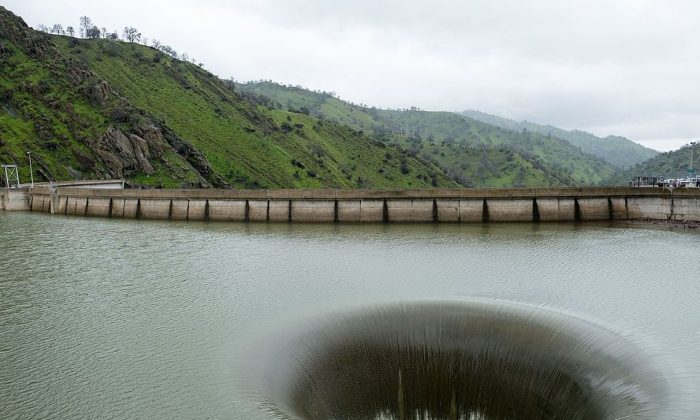 The spillway at Monticello Dam in operation at Lake Berryessa in California (Jeremybrooks via Creative Commons Attribution-Share Alike 4.0 International license)
US News

A “duck” was observed floating into a giant hole in Lake Berryessa, California, and there has been speculation about what happened to the bird.

According to KXTV, the duck reportedly survived after plunging 200 feet down the hole, which is a spillway.

Rick Fowler, a water resources manager, told the station that the duck came out the other side.

“It shot out of there like a bullet,” Fowler said. “It flew through the turbulence and came out of the water shaking water like it didn’t know what had happened.”

The so-called “Glory Hole” only happens when the dam reaches capacity and produces a funnel-shaped outlet allowing for excess water to bypass the dam.

Melissa Vignau with the Solano Irrigation District told KXTV that there is no way the duck could have survived the ordeal.

Did the duck survive or not? One man says the bird made it out alive after getting swallowed by Lake Berryessa's "Glory Hole".

“The velocity of water going through there would have torn it in pieces,” Vignau said.

She said that telephone poles and trees go into the spillway and are usually torn into several pieces due to the velocity of the water.

Fowler disagreed with her assessment, claiming he saw the bird make it out safely.

"From what I understand that water is going down really fast and when things come out the other side… I don't want to get really graphic," a Bureau of Reclamation official said.

“It flew up over the turbulence and landed on the calmer water in the creek,” he said.

In an interview with The Guardian, Fowler said, “Thwack–it shot out of there like a bullet … It looked like a rag doll–like it was dead.”

He added that the “duck” may not actually be a duck, but a cormorant, which are capable of diving more than 100 feet into the water.

“Nobody ever thinks of anything going down that thing and being able to survive,” he said. “But he survived, all right. I watched it.”

“I haven’t seen a bird go there before,” Vignau said. “That’s a new one for me.”

According to SFGate, the spillway opens similar to the drain in a bathtub, but it’s not located at the bottom of Lake Berryessa. Instead, it’s located near the top, and it only appears when the area gets significant rain.

Over the past several weeks, California has received relatively heavy rainfall.

Brionna Ruff, a spokesperson for the Bureau of Reclamation, told SFGate that she doesn’t believe the duck survived.

“From what I understand that water is going down really fast and when things come out the other side… I don’t want to get really graphic,” said Ruff.

What happens when a small bird is swallowed by a gaping "glory hole" (a special drain) in California? Here is your answer

Posted by The Guardian on Wednesday, 6 March 2019

“The chances do not look good for the ducky,” she continued.

Two years after steady rains followed by warm temperatures caused seeds dormant for decades under the desert floor to burst open and produce a spectacular display dubbed the “super bloom,” another winter soaking this year is expected to create possibly an even better show by Mother Nature, according to The Associated Press.

Having two super blooms in two years is highly usual. In California, super blooms happen about once in a decade in a given area, and they have been occurring less frequently with the drought.

The 2017 super bloom was the best seen in the Anza-Borrego Desert State Park in 20 years and drew mass crowds to Borrego Springs, a town of 3,500 that abuts the park.

“There’s just an abundance in where it’s blooming and it’s coming in waves,” said Betsy Knaak, executive director of the Anza-Borrego Desert Natural History Association, which tracks the blooms.