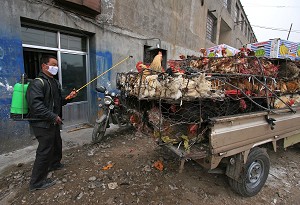 Since October 19, cases of bird flu have appeared in nine regions of China. In two townships in Jingshan County, Hubei Province, 2,500 birds have died. On November 12, the presence of the H5N1 virus was confirmed. Local authorities have culled more than 31,000 birds within a three kilometer radius of the outbreak. No humans are suspected of having caught the virus.

In addition, China’s Ministry of Agriculture and experts from China’s Harbin Veterinary Research Institute have said that the proliferation of bird epidemics in Heishan County, Liaoning Province is a result of peasants using fake bird flu vaccines on their birds. According to an investigation, over 80 percent of poultry at Heishan were reportedly injected with the fake vaccine.

Of the new cases in Jingshan, fake vaccines had not been used in that area, those cases were actually caused by migratory birds, and local authorities have also closed down all the local poultry markets to prevent avian flu, a staff member of Jingshan’s Quarantine Station for Animals said

But a local resident said that she had heard her colleague mention the fake vaccine issue.

On Monday (Novemeber 14), a group of six experts from the World Health Organization (WHO) travelled from Beijing to Hunan Province in order to investigate three individual cases suspected human infections. Among them, the 12-year-old girl, He Yin has already died and her nine-year-old brother, He Junyao, was released from a hospital last Saturday (November 12) after 25 days of medical treatment. The last case is Song Xiangbo, a local 36-year old male teacher who has been also suffering from an “unknown pneumonia.” At present, he is in a stable condition and he is still under observation.

When the director of the Institute of Respiratory Disease in Guangzhou City, Zhong Nanshan accepted an interview from the Shanghai media, he said that he could not rule out that the three cases of pneumonia in Hunan could in fact be SARS.

The General Administration of Quality Supervision, Inspection and Quarantine of the People’s Republic of China (AQSIQ) has decided to conduct spot checks on poultry and meat products and disinfectants in 16 provincial, municipal and autonomous regions, keeping a lookout for enterprises for processing cooked meat products to use infected poultry.

Further, since November 13, Shenzhen City banned live poultry sales in local markets and supermarkets, and also stipulated that eggs should be stored at least five meters away from other foods.

Translated by The Epoch Times