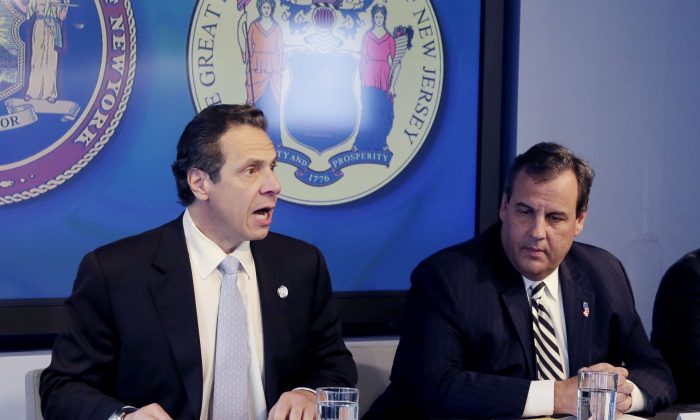 TRENTON, N.J.—Even after a second report was released on the politically motivated lane closures at the George Washington Bridge, legislation to overhaul how the Port Authority of New York and New Jersey is governed remains unsigned by both states’ governors.

Lawmakers from the two states planned a news conference on Tuesday in New York City aimed at pressuring New Jersey Gov. Chris Christie and New York Gov. Andrew Cuomo to sign the measures, which both legislatures have passed.

The bills are aimed at increasing transparency at the Port Authority, which has responsibility over the region’s airports, tunnels, ports, and bridges. That includes the George Washington Bridge, where workers closed access lanes in Fort Lee last September as part of a scheme led by a former Christie aide and a Port Authority official with longtime ties to Christie.

“I would assume that both governors don’t need any pressure,” said New Jersey state Sen. Loretta Weinberg, who also co-chairs the panel investigating the lane closures. “They know about the excesses, they know about the toll increases. If they need any more pressure—well I won’t complete that sentence.”

While the bills received support from both parties, New Jersey’s legislative investigation has generated fierce political sniping, with Republicans saying Democrats are leading an overtly political inquiry while Democrats say the GOP does not want to follow the facts where they lead.

The Democrat-controlled investigative panel publicized an interim report on its inquiry on Monday. The report failed to find proof of a direct connection between Christie and the lane closures. It comes after a report commissioned by Christie drew similar conclusions earlier this year.

The new report turned up deleted text messages between the governor and one of his aides, but the content of the messages is unknown.

The governor’s supporters say the document clears his name. Critics, on the other hand, say Christie showed a lack of curiosity about dealings within his administration.

The U.S. attorney’s office in New Jersey, meanwhile, is conducting its own investigation into the lane closures.

The issues at the Port Authority reach further back than the 2013 lane closure episode that entangled Christie, who’s weighing a 2016 bid for the White House. In 2012, for example, an audit report called the agency “challenged and dysfunctional.”

A 2013 General Accountability Office report concluded the agency didn’t adequately explain its justification for five-year toll increases begun in 2011 and pushed through the hikes without sufficient public comment.

New York’s legislation would clarify the fiduciary duty of the Port Authority’s commissioners, requiring they exercise independent judgment in the best interest of the authority and public it serves.

It would also require audited authority financial statements, detailed annual reports, specific procedures for disposing of property, a whistleblower program, that meetings comply with the open meetings laws of both states, and that commissioners and top staff file annual financial disclosures and comply with rules restricting contact with lobbyists.

The New Jersey legislation is similar and includes provisions for the establishment of an inspector general’s office, the requirement of a study before toll or fee increases, and the opening of hearings to the public.