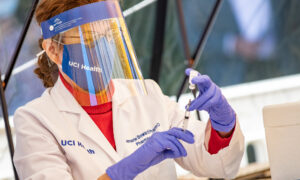 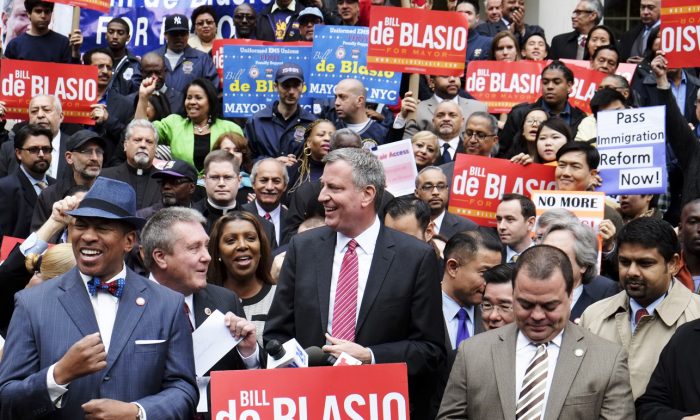 NEW YORK—With throngs of cheering supporters and politicians behind him, Democratic mayoral hopeful Bill de Blasio spoke about the need for immigration reform from the steps of City Hall on Wednesday.

Like many city officials around the country, de Blasio is calling on Washington D.C. to pass comprehensive immigration reform, which is currently stalled in the House of Representatives.

“As with so many issues, wouldn’t it be glorious if we could depend on Washington DC to respond to the needs of the people?” de Blasio asked the crowd. “But we are stuck in the House of Representatives, where so many good ideas have gone to die lately.”

Cities are limited in what measures they can pass to protect undocumented workers, but de Blasio listed several he would take, if elected.

Like many of the candidates, de Blasio wants to see a universal city ID card, which will allow everyone, including undocumented New Yorkers, to open up a bank account and sign apartment leases. New Haven and San Francisco have already enacted city ID cards, and de Blasio said he would look to those cities for ideas on implementation.

The move would require City Council approval, but the Chair of the Committee on Immigration, Daniel Dromm, said he supports the measure and would work to get it through.

De Blasio’s other immigration ideas include stopping the punishment of sponsors for low-income immigrants and cutting the red tape for immigrants who are victims of domestic violence.

De Blasio and his Republican rival have found few things to agree on this election cycle, but immigration is one of them. Republican Joe Lhota issued a statement late Wednesday afternoon lending his support to the Senate’s immigration reform, calling the current policy a “failed policy.”

“It’s absurd that we are a nation of immigrants with a failed immigration policy,” Lhota said in a statement. Like de Blasio, he said he would support a municipal ID card for undocumented immigrants and sign the the Mayoral Executive Order to continue the city’s policy of providing needed services.

“Additionally, I have laid out a comprehensive vision for a strong economy, improved education system, and safe streets free from violent criminals,” Lhota said. “We must ensure that New Yorkers from all five boroughs and all nationalities, ethnicities and backgrounds, have access to a quality education, good-paying jobs that can support a family, and safe neighborhoods.”