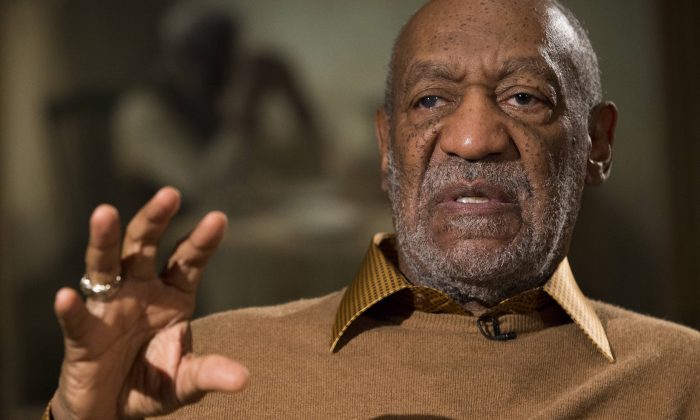 In this photo taken Nov. 6, 2014, entertainer Bill Cosby gestures during an interview about the upcoming exhibit, Conversations: African and African-American Artworks in Dialogue, at the Smithsonian's National Museum of African Art in Washington. The Smithsonian Institution is mounting a major showcase of African-American art and African art together in a new exhibit featuring the extensive art collection of Bill and Camille Cosby. More than 60 rarely seen African-American artworks from the Cosby collection will join 100 pieces of African art at the National Museum of African Art. The exhibit “Conversations: African and African American Artworks in Dialogue,” opens Sunday and will be on view through early 2016. (AP Photo/Evan Vucci)
Entertainment

Bill Cosby has been under fire in recent days after several women went public and accused him of sexually assaulting them.

Over the weekend, Cosby stayed silent and reportedly shook his head “no” when he was questioned by NPR’s Scott Simon about the new allegations against him. He is accused of drugging then sexually assaulting several women.

Cosby has never been charged with any crime.

A report on Monday said that Cosby made a joke about spiking a woman’s drink in 1969 with Spanish Fly in order to make them go wild. He delivered the comments on the 1969 LP It’s True! It’s True, reported RadarOnline.

In the routine, he talks about being 13 years old and growing up in Philadelphia before hearing about the legend of Spanish Fly, which is said to be an aphrodisiac.

“At one point in the routine, the comedian jokes about slipping a whole jug of Spanish Fly in the cocktails of five women standing alone at a party in order to ‘light up’ the corner they’re in,” Radar writes.

On Monday, another Cosby accuser, publicist Joan Tarshis, wrote an article on Hollywood Elsewhere, saying she was assaulted twice in 1969 by Cosby. She was 19 years old at the time, she recalls.

“The next thing I remember was coming to on his couch while being undressed. Through the haze I thought I was being clever when I told him I had an infection and he would catch it and his wife would know he had sex with someone,” she wrote, adding that that didn’t deter him.

“I was sickened by what was happening to me and shocked that this man I had idolized was now raping me. Of course I told no one,” she added.