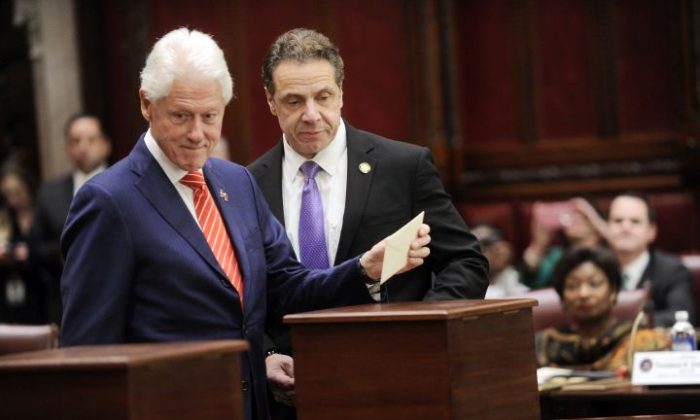 Bill Clinton Tells Reporters About Voting for His Wife

Bill Clinton reflected on his wife Hillary Clinton’s loss as he cast his electoral vote in New York, alongside Gov. Andrew Cuomo.

“I’ve never cast a vote I was prouder of,” Clinton told reporters after voting for his wife in Albany, CBS News reported.

The former president said that during a hard-fought campaign, she couldn’t prevail against alleged Russian hacking and FBI Director James Comey’s letter.

“You know, I’ve watched her work for two years. I watched her battle through that bogus email deal, be vindicated at the end when Secretary Powell came out. She fought through that. She fought through everything. And she prevailed against it all but at the end we had the Russians and the FBI deal and she couldn’t prevail against them,” Clinton said. “She did everything else and still won by 2.8 million votes.”

Clinton, for her part, spoke to donors last Thursday at an event in New York City, where she blamed Russian interference and Comey’s letter. She also directly blamed Russian President Vladimir Putin for allegedly directly getting involved in the trying to sway the election against her due to a personal vendetta.

“Putin publicly blamed me for the outpouring of outrage by his own people, and that is the direct line between what he said back then and what he did in this election,” she said, according to The New York Times.

“He is determined to score a point against me which he did. But also undermine our democracy.”