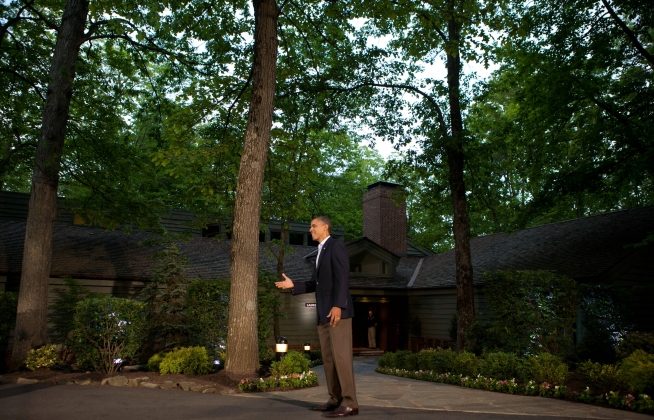 At Camp David, President Barack Obama welcomes G8 Summit leaders outside of Laurel Cabin, May 18, 2012. Vice President Joe Biden and his family took a vacation at the camp from Oct. 13 through Oct. 15, 2013. (White House/Chuck Kennedy)
US

Biden’s Vacation at Camp David, Which is Still Open During Shutdown

The Bidens had a vacation at Camp David this weekend. Joe Biden, vice president of the United States, was joined by his wife Jill, his children, and grandchildren.

Despite the government shutdown, Camp David remains open. More than 250 staffers are still going to work and getting paid.

Most staffers are designated as active duty military personnel–which aren’t getting furloughed during the shutdown–because the camp is operated by the Department of Defense.

The 180-acre camp includes tennis courts, a pool, a skeet range, a bathhouse, and a bowling alley, as well as cabins and other amenities.

The public schedule for Biden indicated he and his wife would be at Camp David, in Catoctin Mountain Park in Frederick, Maryland from Saturday, Oct. 12 through Monday, Oct. 14. “There are no public events,” it read. The rest of his family joined him and his wife, reported the Weekly Standard.

“I’m glad that negotiations are going on,” McCain said on CBS. “I’m disappointed that twice … we were close to a deal and the Democrats moved the goalposts, in light of the polling data.”

“Maybe we need to get Joe Biden out of the witness protection program,” McCain said. The Hill reported that McCain went on, “noting the vice president’s lack of visibility in recent weeks and relationships with his former colleagues in the Senate.”

McCain said it was time for Democrats to be “magnanimous and get things done.”

While there are many publicly available photographs of President Barack Obama, and other world leaders, at Camp David, there are none of Vice President Joe Biden.