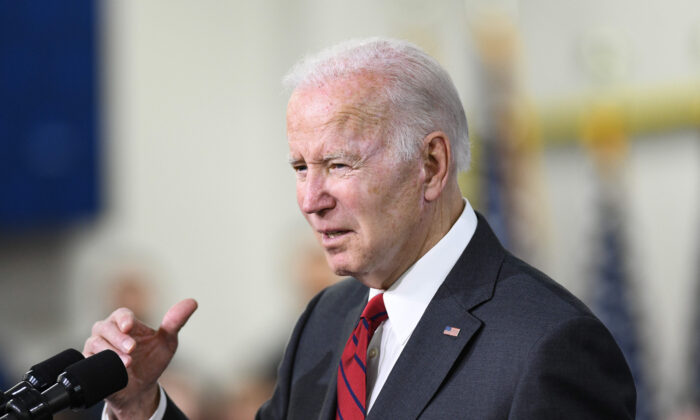 President Joe Biden speaks to employees at Lockheed Martin, a facility that manufactures weapon systems such as Javelin anti-tank missiles, in Troy, Ala., on May 3, 2022. (Julie Bennett/Getty Images)
Business Columnists

President Joe Biden’s proposal for a 20 percent minimum tax on billionaires is largely class warfare by the liberals, signaling to their loyal constituents that they intend to erode the wealth of successful Americans while pretending to target the super-rich.

Under Biden’s Billionaire Minimum Income Tax plan, households with more than $100 million in wealth would be required to report their household wealth to the IRS on an annual basis, according to a White House statement in March:

“The Billionaire Minimum Income Tax will require America’s wealthiest households to pay as they go, just like everyone else: The Billionaire Minimum Income Tax will ensure that the very wealthiest Americans pay a tax rate of at least 20 percent on their full income, including unrealized appreciation. This minimum tax would make sure that the wealthiest Americans no longer pay a tax rate lower than teachers and firefighters. The tax will apply only to the top one-one hundredth of one percent (0.01%) of American households (those worth over $100 million). Over half of the revenue will come from households worth more than $1 billion.”

I thought Biden’s plan was to target billionaires? While $100 million is certainly a lot of money, it’s a far reach from the tens of billions of dollars held by America’s super-rich.

It’s well noted that the wealthiest people in the United States—those worth $50 billion or more—don’t pay their share of taxes. This is one of the more serious issues today within U.S. taxation. The super rich often make staggering incomes ($1 billion per year) from investments or through equity shares from companies they founded or inherited. However, few take such payouts as income.

Additionally, many wealthy families receive incomes from trusts and other vehicles or defer income into investments (such as loaning money to business holdings), so as to not be taxed.

By the way, what’s wealthy in America? To be in the top 1 percent, you need about $4 million in assets. As far as income goes, according to SmartAsset’s analysis of IRS and Bureau of Labor Statistics (BLS) data, a U.S. family needs to make $597,815 annually to be considered a member of the top 1 percent nationwide (that number fluctuates by state).

To be considered in the top 0.01 percent in America, you need a new worth of about $25 million. However, can you honestly say that people making $597,815 per year or people worth $25 million are part of the problem?

When a moderately wealthy person sets aside millions in a trust for future heirs, they’re not dodging taxes. When a multibillionare sets aside billions in an offshore trust, while continuing to own billions in assets—assets that continue to generate billions in profits—they’re most likely dodging a very large tax bill.

The latter should be rectified, but you can’t do it by targeting successful citizens. Americans who generate wealth from earned income pay the lion’s share of taxes. From the middle class to top income earners and even families with generational wealth—these individuals are generally overtaxed.

This past March, the editors of the National Review, in the article “Biden’s Latest Tax Folly,” wrote that “the top 1 percent make about 20 percent of all income but pay 40 percent of the federal income tax—their income-tax burden is twice their share of income.”

“The dishonest rhetoric about millionaires and billionaires paying a lower tax rate than middle-class Americans intentionally conflates different kinds of income,” the article states. “The very wealthy pay a higher income-tax rate on their salaries than do those with lower incomes, and they pay the same tax rate on investment income as lower-earning workers do. The difference is that very high income earners usually make more of their money from investments than they do from salaries.”

Already contributing 20 percent of all income and paying 40 percent of the federal income tax is an incredible burden, but clearly certain politicians want to tax more.

The 16th amendment—which was ratified in 1913 and ultimately empowers Congress to collect income tax from income, not capital—states: “The Congress shall have power to lay and collect taxes on incomes, from whatever source derived, without apportionment among the several States, and without regard to any census or enumeration.”

In 2019, when Sen. Elizabeth Warren (D-Mass.) proposed a wealth tax, little did she know that less than 0.1 percent of tax units in the United States would actually qualify for what she was talking about. Hyperbole aside, the reality is that only a fraction of wealth is taxable, the rest is capital that’s utilized in different ways from common income.

What are unrealized capital gains? Here’s an example. Let’s say you bought your house 10 years ago for $500,000. It’s now valued at $3 million. You have no intention of selling. Under Biden and Warren, you would be taxed on those gains, despite not yet realizing them. The same goes for stocks and bonds or gold or potentially valuable automobiles, baseball cards, and artwork.

Meanwhile, the government tax coffers are doing very well. More than $450 billion in individual taxes was collected this year—more than twice the amount of last year.

Any wealth tax from the Biden administration would be a message to Democrats to use such powers to create a net-worth tax. I wouldn’t be surprised if liberals then attempted to raise the estate tax rate.

If the United States wants to be effective in its taxation, it needs to target the very wealthiest, the 0.0001 percent. In reality, Biden’s plan will target the mass affluent.