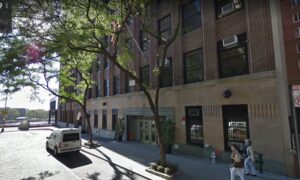 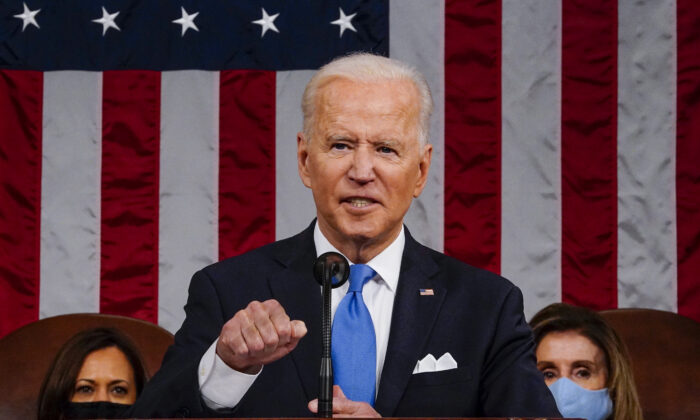 President Joe Biden addresses a joint session of Congress in the House Chamber of the U.S. Capitol in Washington on April 28, 2021. (Melina Mara/Pool/Getty Images)
Viewpoints

In a recent article, I called on Donald Trump, if he were to run again, to define himself as the education president, to bring us back to a system free of ideological bias, one that would teach young people how to think, not what to think, as the present one does, with few exceptions, from kindergarten to doctorate.

I also assumed this would mean a return of education to local government, to the parents and students, the real consumers of the education, and take it out of the hands of Washington bureaucrats with whatever (usually statist) axes they have to grind.

During his April 28 speech, just before his 100th day in office, the current holder of the presidency, Joe Biden, did just the opposite.

He outlined his intention to increase the grip of the federal government on our educational system, this time all the way down to pre-K, and, in so doing, became the Miseducation President.

Of all the titanic spending proposals in his American Family Plan ($1.8 trillion to $1.9 trillion, according to reports—specific costs were curiously left out of the speech, although they were available elsewhere) Biden spoke about that night, his education programs present the most serious long-term danger.

They go to the fabric of our culture and, once started, aren’t easily reversed. Wittingly or not, they have the capacity to bring this republic to a point of no return, making it unrecognizable.

It should be obvious why this is terrible. When the federal government, not local governments, spends gigantic, dominant sums of money on education across the country, it tends to take control—and most often does take control—of what our children and young people are learning.

That means dictating all their textbooks, curricula, testing, and so forth, from the top down, from the center—just as it does today in communist China and did in the Soviet Union and Nazi Germany.

It’s the necessary road to totalitarianism. You don’t get there without control of the schools.

And now they want to start younger, funding pre-K with $200 billion to, dare we say it, brainwash 3- and 4-year olds.

Is brainwashing an exaggeration?

Well, you decide. No mention was made by Biden of critical race theory in his speech (no surprise there, considering it’s radioactive). As most readers know, that’s the neo-Marxist doctrine that says race determines everything in our lives. Federal educational programs are already fraught with it, with its influence being expanded daily, along with the discredited 1619 Project that relates all American history to slavery.

But there is no reason to believe these wouldn’t be repurposed for pre-K consumption.

Could anything be more appalling? The idea of teaching or even implying to 3- and 4-year olds that their entire lives are governed by their skin color is unadulterated child abuse, not to mention directly contrary to every principle you would think this country stood for, that Martin Luther King Jr. preached.

Imagine a white 3-year-old grappling with some dumbed-down version of “white skin privilege” or some black tot being informed he was born a victim for life. What a way to prepare them for the future! (What was the old jingle? “Two, four, six, eight/brainwash and teach to hate.”)

Again, is this an exaggeration? If it’s only partly true, it’s preparing the way for fascism in a way we have never experienced in this country.

And only the rich will be able to survive this abuse, because their children will doubtless be attending private schools, which, though often suffused with similar propaganda these days, are at least accountable to some extent to the parents who pay tuition.

Further, on the education front, Biden proposes to make two-year community college free at a cost to taxpayers of $109 billion with an additional $85 billion for Pell Grants for those who want to go on to four-year colleges and yet another $62 billion to “improve retention rates” for “disadvantaged students.” Then there’s an additional $46 billion for black colleges and other institutions that serve minorities (more segregation).

As they used to say in Esquire when it was funny, “What’s that in real money?”

More to the point, as with pre-K, what do they intend to teach? What are they buying with all this unlimited cash? More control? A special track for those who believe in “systemic racism”? Memorial editions of Herbert Marcuse for every student in America?

The United States has spent more per student than just about any country in the world for some time now with negligible, very often negative results. How will this unprecedented largesse change this?

Does Biden think about those things or is this merely (exorbitantly) expensive virtue signaling?

Hard to say because no one ever accused, at least no one I know, Biden of being a deep thinker. We used to think of him as a scrapper kind of guy, that type that got through law school even when he was caught plagiarizing (extensively) and was able to continue his political career, reach the presidency even, after having been caught plagiarizing several times again from fellow politicians, foreign and domestic.

What he thought was the least of it. Anyway, his positions change with the wind.

Biden’s history always reminds me of that dictum of 17th-century British common law—“Falsus in uno falsus in omnibus” (False in one thing false in everything).

So when it comes to the rest of the non-education part of his massive giveaway, it’s hard to unscramble what he really means or even think he deeply believes in it. The energy in the speech was next to non-existent.

He kind of wants to be FDR-lite while feigning he seeks to bring us together. Then he talks absolute nonsense about Jan. 6, making it a greater threat to the United States than Pearl Harbor.

That nonsense and he are more than a little addled. The real substance seems to be coming to him from other sources (the Obamas, Valerie Jarrett, Susan Rice, and so forth) via a rather obvious stage whisper.

Biden plans to pay for these unprecedentedly generous plans in the traditional manner—taxing the rich. But most times when that’s tried, the rich simply flee to another country. The French had to walk it back when they enacted a wealth tax. The same goes for raising the business tax so that it’s, of all things, higher than communist China’s. (Maybe Apple and Google will finally get it over with and move there.)

But all these economic stratagems can be reversed in a year or two, if they even get through Congress in the first place.

Even an open border can be rebuilt.

It’s his education plans that scare me.