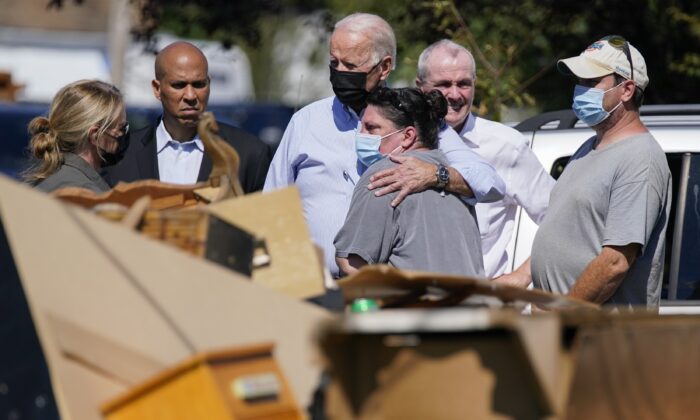 Climate change blamed for the hurricane
By Zachary Stieber

President Joe Biden on Tuesday toured communities recovering from Hurricane Ida in two northeastern states, asserting the storm shows the threat of climate change and the need to invest in infrastructure to prepare for future extreme weather events.

The Democrat saw firsthand the damage from Ida in Manville, New Jersey, and Queens, New York, visiting with residents near their flooded homes.

Garbage bags and sodden furniture were heaped along curbs as residents shook hands and spoke with Biden, Sen. Cory Booker (D-N.J.), and other officials.

“We thank God you’re safe,” the president told one family.

The Millstone River, which abuts the Lost Valley neighborhood in Manville, was already higher than normal when the record rainfall from Ida drenched the area, leading to floods.

Biden, during a briefing with officials in Hillsborough Township, said the storm drove home the need to invest in infrastructure so the next storm won’t wreak as much damage.

“The losses that we witnessed today are profound. Dozens of lost lives, homes destroyed, … damaged infrastructure, including the rail system,” Biden said.

“Every part of the country is getting hit by extreme weather. And we’re now living in real-time what the country’s going to look like, and if we don’t do something—we can’t turn it back very much, but we can prevent it from getting worse,” he added later.

Democrats in Congress, with Biden’s backing, are trying to pass a $3.5 trillion bill that includes climate hardening pieces. A smaller, $1.5 trillion bipartisan bill, passed by the Senate and being considered by the House, is primarily focused on infrastructure.

Addressing the damage from Ida requires being aware of a changing climate, according to the president, or the next storm will bring the same results.

She claimed that weather events like Ida are happening more frequently and when they are, they’re more severe and more intense.

“The effects of climate change that are causing these storms is here. And it’s our job to make sure that we are all ready to respond, as well as prepared,” she said.

The White House didn’t respond when asked for data that links Hurricane Ida to climate change.

A spokeswoman for Criswell told The Epoch Times in an email that she was sourcing from the United Nations, which said last month in a report that effects from climate change, including a more intense water cycle, were being seen across the world.

Biden declared disasters in parts of both northeastern states, where far more deaths were recorded than in Louisiana, which bore the brunt of the storm. The federal aid could extend to additional counties in New York and New Jersey, White House press secretary Jen Psaki told reporters aboard Air Force One.

The Biden administration on Tuesday separately said it was asking Congress to approve a minimum of $24 billion in the wake of Ida, with over $14 billion for natural disasters that happened before Ida and another at least $10 billion for general disaster relief.

The administration wants Congress to include the aid in a small budget measure, or continuing budget resolution (CR), that would push back a looming deadline that’s set to arrive on Sept. 30, the end of the current fiscal year.

“A short-term CR is necessary not only to provide Congress additional time to pass full-year appropriations bills that make bold, forward-looking investments in our future, but also to address the specific, urgent needs facing our country right now,” Shalanda Young, acting director of the White House Office of Management and Budget, said in a statement.