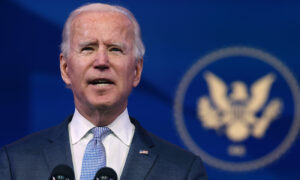 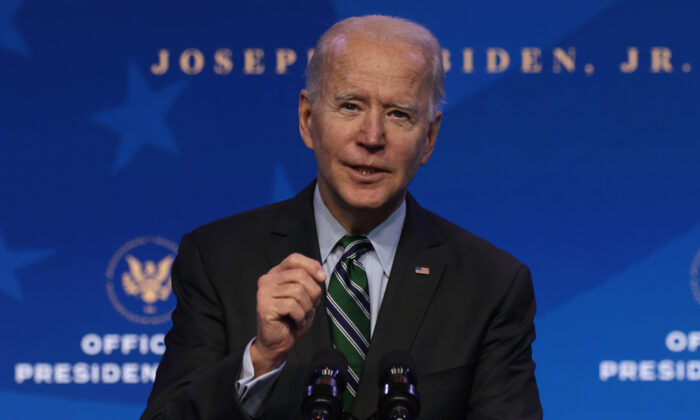 While former Vice President Joe Biden is set to be inaugurated on Jan. 20 as the nation’s 46th president and the Democrats will control both chambers of Congress, that doesn’t assure smooth sailing for his policy agenda, according to experts on both sides of the partisan aisle.

Biden’s problem is the numbers: His party controls the Senate by one vote, that of Vice President Kamala Harris, but only when there’s a split among the upper chamber’s 50 Democrats and 50 Republicans.

That means if, for instance, Democrat Joe Manchin of West Virginia goes against the grain of his partisan colleagues, Harris won’t be called on to break a tie on the issue at hand.

In the House of Representatives, Speaker Nancy Pelosi (D-Calif.) presides over a Democratic majority of only 10 votes, but, with three vacancies still to be filled, the advantage easily could slip to single digits.

It also means Biden will have to rely upon executive orders (EO), rather than legislative action to turn key pieces of his agenda into federal policy.

Relying on EOs is exactly what Maggie Thomas, Biden’s choice as chief of staff for the White House Office of Domestic Climate Policy, reportedly is encouraging the incoming president to do on his first day in office.

But for much of the Biden agenda, Congress simply can’t be bypassed, with the result, according to Republican strategist Brian Darling, that “President Biden’s legislative agenda will be a bit dialed back … Biden will be able to do quite a bit through executive actions, but not nearly as much in Congress unless he enlists Republicans to support his agenda items.”

Darling, who has worked in and around Congress for more than two decades, said, “There are moderate Democrats in the House and Senate who like elected office and don’t want to risk losing their jobs in 2022, therefore, they will resist the most extreme elements of the Biden agenda.”

Similarly, when Democratic campaign strategist Robin Biro was asked by The Epoch Times what he would tell Biden if he was a White House legislative strategist, he said, “what I would tell him is there are more conservative Democrats than there are liberal Republicans, and that we need to acknowledge that and be pretty realistic about what we’re putting before Congress, for that reason.”

Biro, who is based in Atlanta and was a regional political director for President Barack Obama’s 2008 campaign, said he senses a renewal of common sense in Biden’s decisions to not lift President Donald Trump’s tariffs on Chinese imports or tear down the 460 miles of new wall he built on the U.S. border with Mexico.

Looking through Biden’s various proposals, Biro said “there are a lot of good things here for the first 100 days, but there are some things that are going to be a stretch for this divided government that we’ve got.”

Kevin Chavous, another Democratic strategist, told The Epoch Times that he thinks Biden is well-prepared for dealing with an evenly divided Congress, having been there once before under such conditions.

Chavous was referring to May 2001 when Sen. Jim Jeffords of Vermont left the Republican Party to become an independent and caucus with Democrats, thus forcing the replacing of Sen. Trent Lott (R-Miss.) with Sen. Tom Daschle (D-S.D.) as Senate majority leader. At that point, Biden had been in the Senate since first being elected in November 1972.

Chavous also noted that Biden continuously served there either as a senator, or in the vice president’s role as the Senate’s presiding officer from 1972 until 2017. That means Biden has more legislative experience than any previous occupant of the Oval Office and should perhaps not be underestimated in terms of his ability to gain congressional approval for controversial proposals.

Even so, Chavous expects Biden to push hardest in his opening days in the Oval Office for the $1.9 trillion CCP virus relief package, but to delay at least for a while an expected push to persuade Americans to continue wearing masks.

“Another one that is definitely going to be very controversial is the mask mandate, requiring people to wear them—not everywhere, but in federal buildings,” said Chavous, who is based in the nation’s capital.

“It will be a win if he rejoins the Paris climate accord. He can say he did that, and maybe hosting a big summit on climate change,” Chavous said, “showing that it is a priority and that he’s trying to take steps to address it.”

But Chavous expects some time to pass before Biden pushes a more comprehensive package of reforms akin to the Green New Deal favored by the most left-wing of Democrats such as Ocasio-Cortez and Sen. Ed Markey (D-Mass.).

In the meantime, Pelosi may be wondering why, with such a small Democratic majority, Biden has announced three of her charges for major appointments in the executive branch.

The three include Rep. Marcia Fudge (D-Ohio) to be Secretary of Housing and Urban Development, Rep. Debra Haaland (D-N.M.) as Secretary of the Interior, and Rep. Cedric Richmond (D-La.) to head the White House Office of Public Engagement.

Presidential appointments are already proving troublesome for Biden, especially with the prospect of difficulties in Congress for securing confirmation of his top appointees.

All presidents gain leverage in intra-party battles through their power to make appointments, but, with questionable prospects for getting Congress to go along with radical left-wing programs, handing out positions in government will be even more vital for Biden’s ability to keep the progressive wing of his party in line.

But doing so also brings with it more than a few headaches and political risks, as with Biden’s nomination of Kristen Clarke to head the Department of Justice’s Civil Rights Division.

Clarke, a proponent of Critical Race Theory (CRT)—the ideological view that American society and institutions are irredeemably racist—has a long record of controversial race-based statements. She is currently president of the Lawyers Committee for Civil Rights Under Law.

Even as a student at Harvard University in 1994, Clarke’s views on race and American society were causing controversy. In a letter she co-wrote with another student to the Harvard Crimson, Clarke claimed that “melanin endows Blacks with greater mental, physical and spiritual abilities—something which cannot be measured based on Eurocentric standards.”

More recently, Clarke reportedly described Nation of Islam leader Louis Farrakhan as the “GOAT,” or “greatest of all time,” which reignited another scandal from her student days, her invitation of an anti-Semitic speaker while leading the Black Students Association.

Alejandro Mayorkas, Biden’s pick as secretary of the Department of Homeland Security (DHS), also brings baggage from his past. After leaving the Obama administration in 2016, Mayorkas represented multiple controversial corporate clients while he was a partner at the Wilmer Cutler Pickering Hale and Dorr law firm.

One of those, Mission Support Alliance, was charged in 2019 with paying more than $1 million in bribes while seeking a Department of Energy contract.

As director of the U.S. Citizenship and Immigration Services (USCIS) agency in 2015, Mayorkas also was singled out for sharp criticism by the DHS inspector general for exercising improper influence on behalf of influential Democrats such as then-Virginia Gov. Terry McAuliffe.

Another Biden appointment may also hint at something of a political tin ear problem. Former Obama White House communications chief Anita Dunn was forced out of that position in 2009 when it was learned she had once called Mao Zedong one of her “two favorite political philosophers.”

But more recently, Dunn was a key damage-control public relations adviser to embattled Hollywood mogul Harvey Weinstein prior to his trial last year on rape charges. A longtime high-dollar donor to Democrats, Weinstein was convicted and sentenced to 23 years in prison.

Dunn was not paid for her advice to Weinstein, according to SKDKnickerbocker, the communications and lobbying firm of which she was a co-founder.

Regardless of the congressional obstacles that Biden may encounter, two veterans of the conservative policy advocacy community told The Epoch Times they expect the new administration to push progressive policies and programs of unprecedented scope and cost.

“The incoming Biden administration could be one of the most progressive administrations in the history of the country,” said David Williams, president of the Taxpayers Protection Alliance.

“In particular, raising the corporate tax rate and instituting a nationwide $15/hour minimum wage would weaken the economy and be disastrous for taxpayers, businesses, and consumers,” Williams said.

“Another area of concern is what could happen at the individual agencies where excessive regulations could make a comeback, further hamstringing the economy.”

In other words, Williams said, “it is going to be a very difficult four years if Biden moves forward with a progressive agenda. The deficit and debt will continue to skyrocket, and America will lose its global competitiveness. Individuals may not flee the country, but businesses and capital surely will.”

Tom Schatz, who has led Citizens Against Government Waste (CAGW) as its president since 1992, told The Epoch Times he believes “the Biden administration’s radical far-left agenda will result in the largest and most intrusive government in history. Economic recovery from the [CCP virus] pandemic will take longer than expected due to higher taxes, increased regulations, and higher costs of doing business.”

Schatz also expects some of Biden’s proposals, “like a $15 minimum wage, will disproportionately hurt the people that the administration allegedly wants to help the most. For example, restaurants, if they are in business at all, are being forced in most states to operate at 50 percent capacity. They can barely pay rent, let alone hire workers at higher wages than they paid before the pandemic.”

The bottom line, according to Schatz, is that Biden, like so many other elected officials in Washington, believes that “solving problems can only be done by spending money and promulgating regulations, because otherwise they would have nothing to do.”

“If an existing program or regulation is ineffective, inefficient, and duplicative, rather than making them work better, they just create a new program, which costs money but doesn’t solve anything. And the Biden administration will do all of that quite well.”

Schatz also expects Biden to back Democratic congressional efforts to bring back earmarks, the costly practice of designating federal funds for projects that benefit a member’s family, friends, campaign donors, or former staffers.

In his last two years as a senator, Biden sought 140 earmarks costing $226.7 million, according to Schatz, who said data wasn’t available for the prior years.