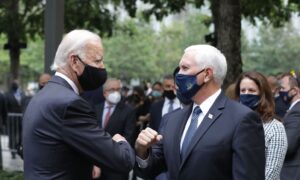 Pence and Biden Greet Each Other at Sept. 11 Memorial
0 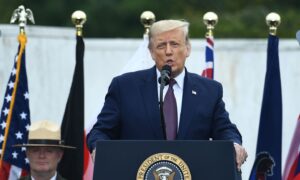 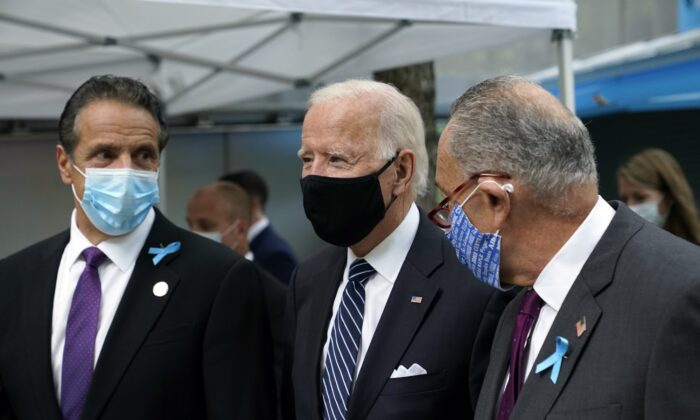 Biden: 9/11 a Day for Remembering ‘All My Friends That I Lost’

The anniversary of the Sept. 11, 2001 terror attacks is a day for remembering people that lost their lives, Democratic presidential nominee Joe Biden said.

“It means I remember all my friends that I lost,” Biden told a reporter at the 9/11 Memorial and Museum in New York City, where he and his wife attended a ceremony to honor the victims of the attacks, after being asked what the day means to him.

“It takes a lot of courage for someone that lost someone to come back today,” Biden added. “I know from experience, losing my wife, my daughter, my son, you relive it, the moment as if it’s happening. It’s hard. It’s a wonderful memorial, but it’s hard. It just brings you back to the moment it happened, no matter how long, how much time passes. So I admire the families who come.”

Biden spent time at the memorial speaking to relatives of the deceased and also spoke with New York Gov. Andrew Cuomo. The men were close together, ignoring social distancing guidelines imposed by the governor due to the COVID-19 pandemic, as did other officials, including Vice President Mike Pence.

At one point, Biden spoke to an elderly woman in a wheelchair who held a picture of her son who she said died at age 43.

Biden took the picture, looked at it, and told the woman: “It never goes away.”

She and Biden then made small talk.

He later went to the Flight 93 National Memorial in Shanksville, Pennsylvania, where a plane plunged on 9/11 after crew members and passengers disrupted a plan to ram it into the U.S. Capitol in Washington.

Biden laid a wreath of white flowers on the memorial and spoke with several families away from reporters.

President Donald Trump went to the memorial earlier in the day, promising that the United States “will never relent in pursuing terrorists that threaten our people.”

The president then returned to Washington to award the Medal of Honor to a member of the military who was injured during a raid in Iraq.

In a separate statement sent out by Biden’s campaign, the former vice president called the terror attacks “an unspeakable act of cowardice and hate.”

Describing the horror that family members felt with the loss of loved ones, Biden said he and others wondered “together whether life in America had been permanently thrown off of its axis.”

“But as so often happens in moments of crisis, the tragedy of 9/11 revealed the character of Americans. First responders and ordinary citizens who ran courageously into the cloak of ash and fire to save the lives of those they’d never met,” he said.

“A new generation who answered the call to serve their country in uniform. Our leaders, who put differences aside for a time to form a united front of empathy, comfort, and resolve for a nation in mourning. And our people, who came together to summon from our shared grief the hope and common purpose we needed to get up and go on.”

The spirit of Americans “recovered as it always does,” he added.

Biden compared what happened in 2001 to the COVID-19 pandemic, calling it “another crisis that compels us to summon the best of the American people in the face of unconscionable” and praising frontline workers like nurses and grocery clerks as heroes.