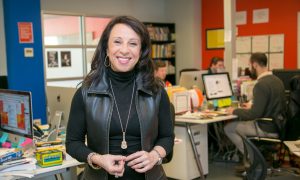 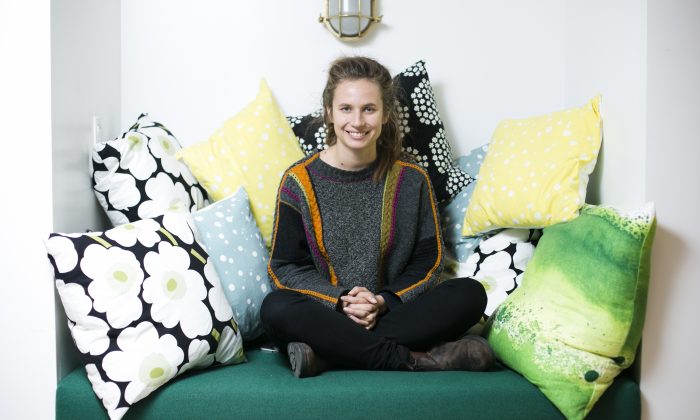 Filmmaker and radio producer Bianca Giaever talks about her work in the office of the production and entertainment company, Missing Pieces in Brooklyn, New York on Dec. 16, 2015. (Samira Bouaou/Epoch Times)
Entertainment

Bianca Giaever on the Joys of Mulitimedia Storytelling

NEW YORK—Definitely a curious person, Bianca Giaever likes talking with strangers and telling their stories. She can expose a richness of insight even focusing on the most mundane topics. Whether in writing, radio, or video, her stories span a wide range of emotions, swinging in mood from light and playful to downright sad and tragic, to even transcendent.

“I feel like everyone is walking around with all their life experience and every epiphany they have ever had, and I’m trying to get them to open up and talk about it basically,” she said in the kitchen area of m ss ng p eces, a production company she works with in Brooklyn.

You may have come across Giaever’s work in The New York Times, on NPR shows such as “This American Life” and “Radiolab,” or via websites like Buzzfeed, The Huffington Post, and The Atlantic, to name a few.

A couple of years ago she produced a video, “The Scared is Scared” based on a 6-year-old’s idea of his dream movie. Beautifully simple in how she executed it, the video is 100 percent faithful to Asa Baker-Rouse narrating a story about a bear, a mouse, a swimming pool, a piano shaped cookie, and friendship, and it also gives some wise advise on how to deal with loss and anxiety. The adorably sweet and uplifting video went viral on the Internet garnering about 1 million views.

“The Scared is Scared” by Bianca Giaever on Vimeo.

Giaever (pronounced Gay-ver) was inspired to do that video, and its precursor, “Holy Cow Lisa” to cheer herself up.

“I wanted to make something happy because I was coming off of a really depressing breakup and I just wanted to feel better again,” she said.

Shortly after, she moved on to helping others.

Both parties give the time and set the intention to go deeper than you would in a normal conversation.
— Bianca Giaever

In her “Videos 4 U” series, featured on “This American Life,” she finds people who are having trouble saying something and helps them get their message across, like a couple who had an unspoken pact not to say “I Love You” to each other, a daughter who was afraid to tell her parents she had “Tattoos” all over her body, or a son who could not communicate with his father growing up because they didn’t speak the same language in “RSV-Pa.”

Suddenly you are in this social space that doesn’t normally exist where you have the freedom to ask anything you want.
— Bianca Giaever

On the other end of the spectrum, her radio story, “Dear Hector” is about an octogenarian whose adopted daughter was raped and murdered. Giaever let Hector unfold the process of how he got to know the murderer by writing letters back and forth and was eventually able to forgive him. It’s a very touching, profound story—hard to hold tears back while listening to it.

She produces stories in cycles from sad to serious, fluctuating between contemplating mortality and the lighter side of life. “It’s like an endless cycle,” she said.

She has heard other radio reporters describing the microphone as a magic wand. “Suddenly you are in this social space that doesn’t normally exist where you have the freedom to ask anything you want. And they don’t have to answer, but both parties give the time and set the intention to go deeper than you would in a normal conversation. It’s really exciting,” she said.

Giaever has a special preference for radio as a medium, because of how it lends itself to more intimate and longer format storytelling, which hasn’t really been commercialized. Still the success of her videos led her to produce a bigger project.

“I had a fear of doing commercials so it took me a long time to sign in,” Giaever said about getting on board to work with m ss ng p eces (Missing Pieces) in March 2015, even though she had already been knocking ideas back an forth with its executive producer, Ari Kuschnir for about two years. Still she took the plunge and was approached to direct a video for jetBlue.

At 16 min, “HumanKinda” is the longest of three branded videos Giaever has made, and her first comedy documentary. Compared to her previous work done on tiny budgets with her friends over many months, and on very specific topics with a very specific angle, “HumanKinda” had different challenges. There were more players involved, such as an ad agency, a client, a larger production crew, and so on, also the topic was general, and the genre was more difficult.

Every year jetBlue spends a little bit of its marketing budget on something other than traditional advertising. JetBlue’s Vice President of Brand and Product Development Jamie Perry said its mission is to inspire humanity, and more specifically, to treat its customers like human beings and not like cattle. So jetBlue asked Giaever to produce a video that would inspire its customers.

“We came across this epidemic of busyness and we were looking for insights,” Perry said at the launch screening party of “HumanKinda” at a hotel in Soho in October 2015.

That was quite a broad topic to tackle. “It was kind of a puzzle,” Giaever said after the screening. But the biggest challenge was striking the right tone for a comedy documentary.

“It is a very fine line of not making fun of people, or anyone in it, and still having it be funny,” Giaever said. “You want the audience to take the issues seriously, laugh while they are watching it, and not be making fun of the people whose real lives it is about. There’s a lot of stuff I had to navigate there,” she added.

Giaever had a lot of decisions to navigate, working with the editors to reduce 50 hours of recorded video, from 12 days of shooting, to 16 minutes for the final video.

Moderating the panel discussion after the launch screening, Arianna Huffington, author, co-founder and editor-in-chief of The Huffington Post, applauded Giaever.

“I think you did an amazing job hitting a tone, which was not at all preachy, which brought us in, and was entertaining. And it made a very serious point, but you didn’t feel hit over the head—so congratulations,” Huffington said.

When asked if she would consider doing more branded videos, Giaever said, “I’m still very new to that world and how it works.”

“It’s really hard to stay true to your vision and your authenticity as your projects start to grow. If when I’m older, I’m continuing to get to do things that are in my voice and true to me that’s great. Sounds cheesy, but …” she said smiling.