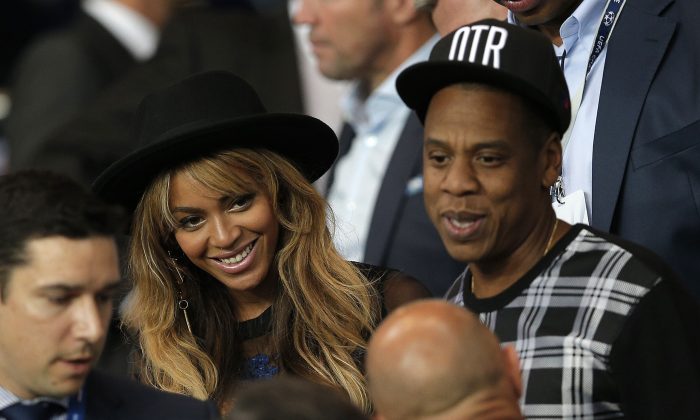 In a Tuesday, Sept. 30, 2014 file photo, Beyonce and her husband Jay Z stand up at half time in the Champions League soccer match between PSG and Barcelona, at the Parc des Princes stadium, in Paris. (AP Photo/Christophe Ena, File)
Entertainment

Beyonce wants a second child sooner rather than later, and has targeted spring 2015 as the deadline.

As part of the relationship overhaul with her and Jay-Z, Beyonce wants to get a brother or sister for Blue Ivy.

“This is all part of a make or break situation,” a source told OK Magazine.

“Renewing their vows was the first step, then a new city, a new scene.”

The pair recently renewed their vows and started looking for a house in Paris.

Beyonce wants a child by next spring, the source said.

“If all goes well they’ll start trying for a baby before Christmas,” the source said.

“She wants to be pregnant by spring.”

The star couple has been surrounded by divorce rumors, which died down after their worldwide tour but cropped back up again after a video and pictures emerged seeming to show them fighting at a recent Brooklyn Nets game.

But the pair have mended their relationship, the insider said.

“They’ve worked through a lot of their problems and have a string of rules they’re sticking to keep the marriage alive,” the source said.

“There’s no better feeling than holding my beautiful nephew,” Beyonce said via Instagram.

“I thank god for the honor of witnessing my sisters journey into motherhood. I’ve always dreamt of our little ones growing up together. I’m so thankful for our bond. Baby Ty, I love you so much. Congrats to my Spoons.”