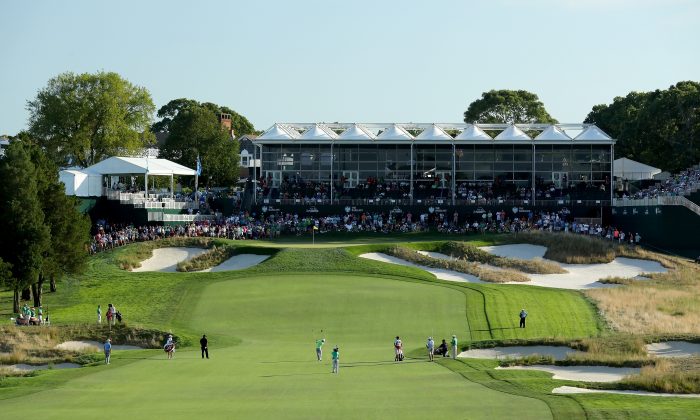 Emiliano Grillo of Argentina plays his second shot on the 18th hole during the third round of The Barclays in the PGA Tour FedExCup Play-Offs on the Black Course at Bethpage State Park. (David Cannon/Getty Images)
Golf

FARMINGDALE, NY—Having The Barclays return to Bethpage State Park’s Black Course this week for the first time since the ’12 event was a real treat in so many ways. The A.W. Tillinghast layout is one that the best players in the world relish for the utmost challenge it provides.

The fans of Long Island were also eager to get back into the action — rooting for their favorite players and enjoying what a superb facility has given to so many golfers over the years.

The main drawback with the Black Course is the lackluster closing hole. The par-4 18th can play to a max of 411 yards but it’s existing design — carried out by architect Rees Jones when the facility was auditioning for the ’02 U.S. Open — is simply a downer given the quality of the holes that immediately precede it.

The 18th is pinched in by a cluster of bunkers on both sides of the hole. Golfers can easily get to the more wider portion of the fairway by simply taking less club from the tee. Given the fact the hole is already short — the cautious play off the tee leaves nothing more than a maximum of 150-175 yards from the elevated putting surface.

In the ’09 U.S. Open the eventual champion Lucas Glover teed off with a six-iron to protect his lead. A 6-iron?

The 18th at Bethpage Black is in a simple word — dullsville.

The best players in the world know a prudent play and while that strategy works for them it does nothing for a course that has provided so many fascinating holes that have preceded it.

When players walk across Round Swamp Road for the final four holes the anticipation of what might happen is clearly palpable. The uphill 15th is a beast of a hole. The downhill 16th calls for two well-executed shots to get to a angled green. The uphill par-3 17th with its lower and upper tier is vexing and can only be overcome with a stellar approach and a deft putting touch. The 18th simply doesn’t provide the kind of summary statement that an ending hole needs to provide.

With the PGA Championship coming to Bethpage in ’19 there’s time to do something in which the ending hole more than matches the quality of the holes that have already been played.

So what are the options. From my vantage point — two are possibilities.

The first is taking the existing 18th and converting it into a driveable par-4 — anywhere from 325 to 350 yards. This way there is some sort of enticement for players trailing in an event to make one big bold shot and possibly close with an eagle. The existing green site has been reduced in terms of total size and likely would need to be brought down to fairway level so that players could think about driving it. Clearly, the green configuration and the placement of greenside bunkers would need to be thought out properly.

The one glaring omission for Bethpage from a hole perspective is the lack of a quality short par-4 — a new 18th could provide what is now missing.

The second option is a bit more daring but could very well work. Using the existing teeing area of the 18th — the players would hit their tee shots to the adjoining 1st hole on the Red Course which parallels that finisher on the Black. From that location the hole would turn slightly left and end at the green of the 18th hole of the Red Course. This hole would play anywhere from 500-520 yards and pack plenty of demands for any finishers. There would be the need for some tree removals near the green of the 18th of the Red for gallery stands and an existing cart path would likely be need to be removed and grassed.

The closing hole would befit what the Black does better than most other top tier layouts — separate the weak from the strong — the creative versus the predictable. Using holes from other courses is not a unique situation. Royal Melbourne in Australia has done this on numerous occasions — ditto the likes of Congressional just outside of Washington, D.C., The Country Club in Brookline, MA and Ridgewood CC in Paramus — a past site of The Barclays, to name just a few courses of note.

The PGA Championship in ’19 could be such an unveiling. The existing 18th hole at Bethpage Black is fine for the masses of players who have played the course countless times. But adding another “new” 18th would clearly be the way for any worthy champion to be crowned in a manner worthy of the title earned.