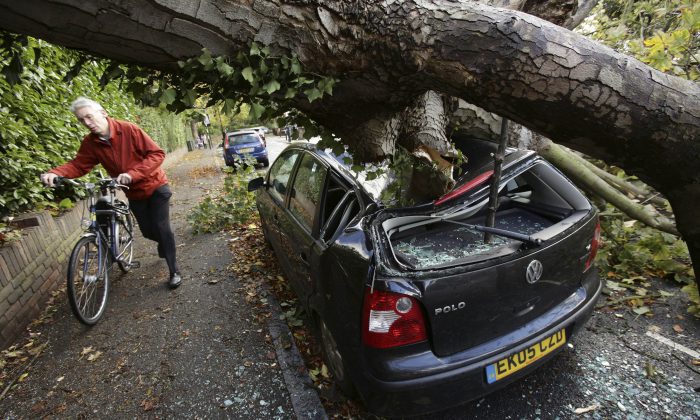 A car is crushed under a fallen tree as a man pushes a bicycle nearby following a storm, in Hornsey, north London, Monday Oct. 28, 2013. A major storm with hurricane-force winds is lashing southern Britain, causing flooding and travel delays including the cancellation of roughly 130 flights at London's Heathrow Airport. (AP Photo/PA, Yui Mok)
UK

Bethany Freeman, a 17-year-old English girl, was killed during the St. Jude superstorm that hit overnight. Another victim, named Donal Drohan, was also killed in the storm.

She was killed when a tree fell on a caravan in Kent, reported the BBC. She died on the scene at around 7 a.m. local time.

Neil Chapman, a driving instructor who arrived at her home, described her as a “super kid.”

“I was teaching Bethany to drive. I’d just arrived not realizing all this had happened,” he said.

He added: “Her family must be so devastated. I can’t believe it.”

She was a student at Tunbridge Wells Grammar School. A statement from the school on Monday said, “Beth was a dedicated and truly outstanding sportswoman, whose unparalleled role in TWGGS sports will truly be sorely missed.”

A neighbor, who was not named, told the Mirror that she was sleeping in the caravan because the family was working on their home.

“[The family] were planning to join up their two buildings, and they were living in the caravans in order to do it,” the neighbor told the Metro. “They had been living there for one and a half years, but I don’t know how many of them there are. She was in one caravan, and mum was in another caravan. I don’t know who else was there.”

The publication identified Donal Drohan as another person to have been killed by falling trees.

He was driving along Lower High Street when a tree came down on him.

The accident took place at around 6:50 a.m. local time.

The Associated Press reported that at least four people were killed and hundreds of thousands were left without power due to the storm.

The storm has since headed to other parts of Western Europe, including the Netherlands, on Monday.