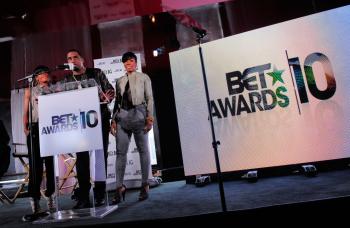 Ian Ritz
View profile
Follow
biggersmaller
Print
The 2010 BET Awards are scheduled to air at 8 p.m. Sunday with long line of celebrity entertainers. Among those participating in the event will be host Queen Latifah.

The BET Awards 2010 will include rappers, singers, actors and actresses who will appear as guests as well as nominees for a long list of awards.

One of the most coveted awards given during the event will be the prestigious Viewers Choice Award. There will also be honorary awards given to the legendary pop singer Prince along with Grammy Award-winning singer John Legend.

Queen Latifah recently announced her appearance to her fans on her Twitter page.

Grammy Award-winner, and soon to be mother, Alicia Keys will be performing at the awards show with world famous rapper Kanye West.

The 2010 BET Awards has been rated as the number one rated show among African American viewers in the U.S. This year will mark the 10th anniversary of the awards ceremony held at the Shrine Auditorium in Los Angeles, CA. BET will also stream the awards show via their official website.

There will be a plethora of entertainers stepping up to claim their award at the show. There are 19 separate categories that include musicians, actors, actresses, and sports stars.

Grammy Award winning rapper Jay-Z, who has sold more than 40 million records worldwide, was described by BET as the “front runner” for the 2010 BET Awards.

Alicia Keys is the runner up with four nominations that include Best Female R&B Artist, Best Collaboration, Video of the Year, and the Viewer’s Choice Award.