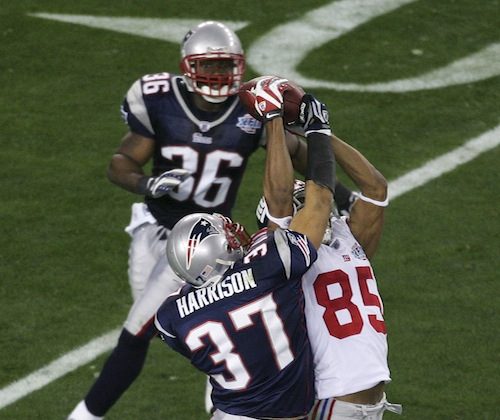 With Super Bowl Sunday fast approaching, here’s hoping we have another exciting contest.

Once thought to be an annual blowout the Super Bowl has delivered a number of exciting contests of late. Here we rank the best six:

This New England team was the first of the Brady-Belichick era and they caught most people by surprise. The lightly regarded Patriots were 14-point underdogs to St. Louis’ awesome aerial show.

Brady, less than two years removed as a sixth-round pick had only become the starter after an injury to the incumbent Drew Bledsoe. Belichick, meanwhile, was in his second season at the helm of New England just five years removed from an unsuccessful stint as head coach of Cleveland.

The game saw the underrated Patriots convert three Ram turnovers into a 17–3 fourth-quarter lead, before Kurt Warner’s offense finally came alive for a pair of late touchdowns to tie it up with just 90 seconds left. As it turned out 90 seconds was plenty of time for Brady, who drove his team 53 yards on nine plays before watching place kicker Adam Vinatieri hit the game-winning field goal as time ran out.

5. Super Bowl XXV, Jan. 27, 1991: (16-3) Giants 20, (15-4) Bills 19—Game MVP: Ottis Anderson. Ranked here because: The great escape. A little more exciting than the contest above as the Rams looked confused for three quarters, this one had two great teams playing their best and easily could have gone the other way.

The Giants had Bill Parcells running the show and his right-hand man Bill Belichick running the defense—maybe the best coaching duo in history—and they needed every ounce of game-planning out of them. Their task was to keep the Bills no-huddle offense off the field with their own offense led by backup quarterback Jeff Hostetler.

Judging especially by the time of possession, the plan worked.

New York held the ball for a little over 40 of the game’s 60 minutes, an astonishing number, yet the Bills still found themselves in position for a very makeable 47-yard field goal try with time running out that would have won the contest. Scott Norwood’s pressure-filled attempt of course, sailed wide in probably the most famous Super Bowl ending of all time.

4. Super Bowl XXIII, Jan. 22, 1989: (13-6) 49ers 20, (14-5) Bengals 16—Game MVP: Jerry Rice. Ranked here because: The drive. It wasn’t Elway’s drive against Cleveland in the ’87 playoffs but Joe Montana’s calmly executed 92-yard touchdown-march with just 3:20 left and his team trailing by a field goal, cemented his status as Joe Cool and gives this contest a better-renowned signature moment than the one above.

San Francisco, even with its awesome Montana-to-Rice connection, had played catch up the entire second half, thanks in part to four turnovers, but still had forced the Bengals into a field goal late in the game to put the deficit at 16–13 when Montana and the offense took over. Eleven plays and nearly three minutes later the Hall-of-Fame quarterback found John Taylor in the end zone with to win it. All-Pro receiver Jerry Rice had a Super Bowl-record 215 yards receiving.