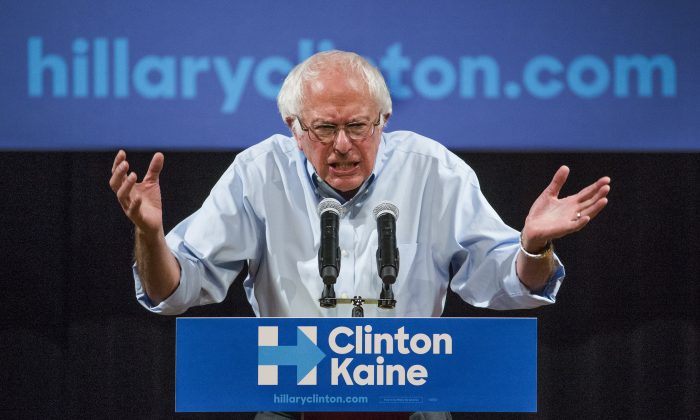 Bernie Sanders addresses a Clinton-Kaine rally inside the Prochnow Auditorium at Northern Arizona University on Oct. 18. (Tom Tingle/The Arizona Republic via AP)
US

Carrier employees ecstatic about keeping their jobs
By Jack Phillips

The Carrier deal, as announced by Trump this week, is widely viewed as a win for his incoming administration. Carrier, an air conditioner company based in Indiana, was planning to move south of the border to Mexico, killing more than 1,100 American jobs.

“In essence, United Technologies (parent of Carrier) took Trump hostage and won. And that should send a shock wave of fear through all workers across the country,” Sanders, an independent, wrote in an editorial in The Washington Post on Thursday, assailing the president-elect for not trying to protect the “working class.”

Sanders, who has railed against big corporations and Wall Street banks, alleged that corporations can get better tax deals under the Trump administration by threatening him and saying, “We’re going to Mexico.”

“He has signaled to every corporation in America that they can threaten to offshore jobs in exchange for business-friendly tax benefits and incentives,” Sanders wrote.

On the campaign trail, however, Trump criticized Carrier and other U.S. firms for investing in Mexico at the expensive of the U.S.

But one Carrier employee, Robin Maynard, was ecstatic about the deal to save his job.

“I would like to get up and shake [Trump’s] hand and congratulate him and Mr. Pence on doing an excellent job and taking their time to, during the holidays even and out of their busy schedule, to go ahead and start talking with Carrier,” he told Fox Business.

In a statement, Carrier said it received “incentives” from Indiana, the home state of Vice President-elect Mike Pence, without elaborating on the specifics.