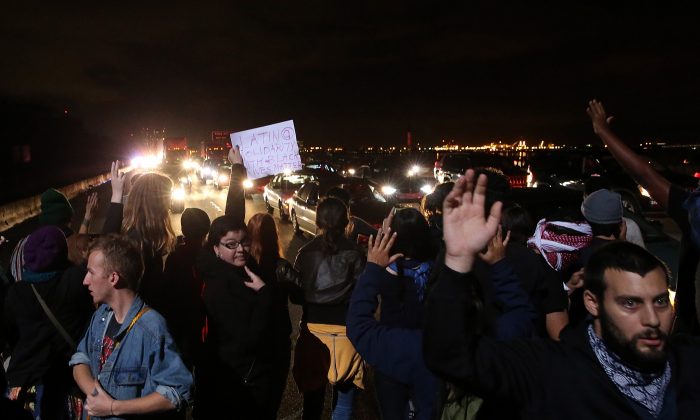 Protesters block interstate 80 during a demonstration over recent grand jury decisions in police-involved deaths on December 8, 2014 in Berkeley, California. (Justin Sullivan/Getty Images)
US

BERKELEY—An estimated 1,500 protestors marched through the streets of Berkeley for the third night in a row, disrupting the city’s traffic and blocking a major California highway. This time, the police and local residents were prepared for the protests, and the city sustained fewer incidents of violence and vandalism than the days before.

On Monday, high-profile stores near the epicenter of the protests had preemptively boarded up their windows and closed early, and helicopters had started circling over the city by mid-afternoon.

The non-indictment of a Staten Island police officer involved in the fatal arrest of Eric Garner triggered protests across the country. In Berkeley, the protests turned violent, and over the weekend demonstrators damaged cars, broke into and looted stores, and threw bricks, bottles, and rocks at officers.

A police officer suffered a serious shoulder injury after being hit with a lag bag filled with gravel on Saturday, and two more were injured on Sunday, but no officer was injured on Monday night, nor was any store damaged or looted, the police department said.

On Sunday, protestors broke into and looted a Radio Shack, and a McDonald’s a block away from UC Berkeley had its windows broken. On Monday, the restaurant had boarded up its windows by mid-afternoon, but remained open even as the protests began. The same contractor also boarded up the windows of the Chase Bank and T-Mobile store downtown.

T-Mobile and a few stores closed early, but most of the shops on Shattuck Avenue—the city’s thoroughfare where the looting took place—maintained regular business hours. A cashier at the Starving Musician guitar shop said that he wasn’t worried about looting because the protesters seemed only to target big corporate chains.

At least one small business was caught in the cross-fire. Protesters broke windows at The Missing Link, a bike cooperative next to McDonald’s, on Sunday. The windows were boarded up for the next night. Nothing was taken from the store.

The looting of Radio Shack alienated some residents who support the message of the protests and of the protesters themselves, granted they remain peaceful.

“There were a number of people, by far the minority of the people in the protests, who came intent on causing mayhem,” said Phil, a 40-year resident of Berkeley who had gone to Radio Shack to see the damage. “They would break into stores like this and steal the goods, what does that have to do with justice for people of color?”

A protester was caught on tape being hit in the head with a hammer after he tried to stop other protesters from breaking into the Radio Shack on Shattack Ave.

The protestors assembled by 6 p.m. Monday and marched through the business and residential streets of downtown Berkeley, at one point stopping in front of a UC Berkeley dormitory building. They blocked Shattuck Ave. temporarily before confronting police officers at the Berkeley Police Station.

The front of the station had steel barricades set up in advance, and officers in riot gear and batons told the protestors not to cross the barricades.

During the face-off, the protestors rotated between slogans, from “peaceful protests” and “this is what democracy looks like” to “you can’t arrest all of us.” A few taunted the officers, chanting “No justice no peace,” and cursing the police. One tapped the barricade with his scooter after officers motioned for them to back off.

The protests drew a diverse crowd, and not everyone was united on its message or method.

“I’m not here for Michael Brown, but I’m here against police brutality,” said Tony, a student at UC Berkeley who did not give his last name. Tony walked in the protest but stayed on the sidelines, and disapproved of its blocking of traffic.