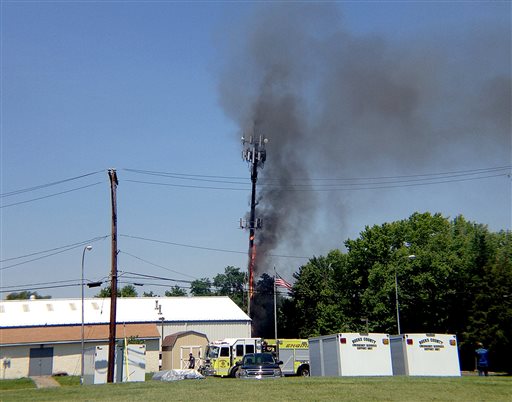 A cellphone tower burns at the Bensalem Municipal complex Friday, June 21, 2013 in Bensalem, Pa. A 75-foot-tall cellphone tower caught fire on Friday while work was being done on it and was leaning, prompting the evacuations of nearby homes. It was later removed safely. (AP Photo/Bucks County Courier Times, Jo Ciavaglia)
US

Bensalem tower fire: A 75-foot-tall cellphone tower caught fire on June 21 while work was being done on it and was leaning, prompting the evacuations of nearby homes.

The flames were mostly extinguished, and there were no reports of injuries.

The fire broke out while telecommunications work was being done and was sparked by a welder’s torch, police Sgt. Andrew Aninsman said. The tower was later brought down safely, according to WPVI-TV.

A large crane was used to take the metal structure down.

PECO cut off power to the tower, Aninsman said, and cellular carriers rerouted to use other ones.

Firefighters in Bensalem, about 20 miles northeast of Philadelphia, reported the tower was on fire around 11:30 a.m. Friday. Television footage of the blaze showed clouds of smoke rising from the tower. The fire was mostly extinguished shortly after noon as nearby homes were evacuated as a precaution. Water wasn’t able to be used because of electrical wires.

“It was real scary, because flames were just going up for a good 45 minutes,” resident Merolene Robinson told WPVI.

AT&T planned to bring in a portable cell phone tower to replace coverage.