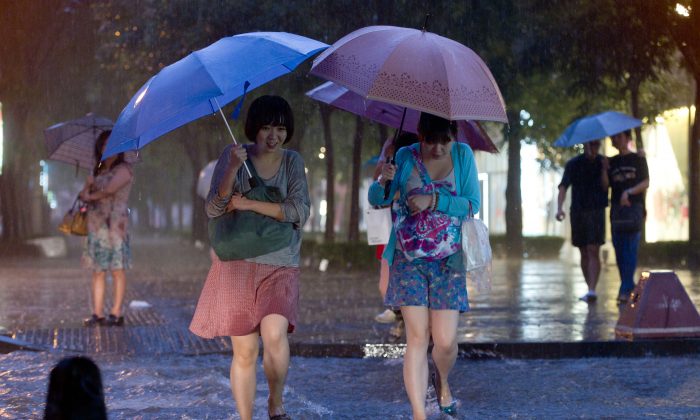 Two women cross a flooded street during heavy rainfall in Beijing on July 21, 2012. Beijing is installing nets in up to 1,000 manholes to prevent people from falling in when covers are removed, by either thieves or floodwaters. (Ed Jones/AFP/Getty Images)
China

Citing the safety of pedestrians, cyclists and drivers, Beijing is installing safety nets and pop-up warning posts to warn of open manholes.

Recent fatalities in Hunan Province and last year’s dangerous flood in Beijing have prompted the test installation of 1,000 manhole safety devices in the capital, reported The Beijinger. If they are a success, they will be deployed throughout the city.

Although theft of the heavy metal covers has diminished, there were an estimated 240,000 stolen in 2004, probably for resale as scrap metal, The Beijinger said the dangers still remain from open man holes hidden under Beijing’s frequent flood waters and maintenance workers leaving manholes exposed with no safety barricades.

The test devices include an activation mechanism in the manhole opening, plus the safety netting and a large, bright red and yellow warning pipe which both swing into position when the cover is removed. The net would catch unwary pedestrians or cyclists who might not see the hole, and the pipe would extend above flood waters to mark the position of the manhole.

During last years’ historic Beijing flood, the pressure of the flood water in Beijing’s drainage system blew off many manhole covers, while others were removed by municipal crews to drain the water rushing in the streets. Open manholes made transportation of any kind in parts of the city treacherous. Police and city maintenance staff were stationed at open manholes to direct traffic away from them.

“All the manholes had vanished because the water was sitting on top of them. It looked very dangerous and very difficult to find where these holes were,” said Tom Smith, a British student in Beijing, telling the BBC of his experience during the flood.

A British businessman who was also in Beijing at the time told BBC of seeing a woman swept by the floodwaters and trapped in a manhole: “Some 20-30 people had surrounded her but only a few could help,” he told the BBC. “It didn’t look good at first as the water continued to flow over her head, but after about five minutes they pulled her free.”