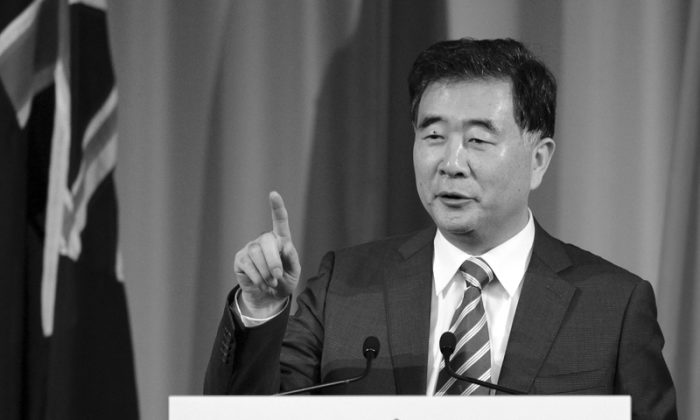 Official media made high-profile reports on the trip. Wang was accompanied on his tour by Guangdong Province secretary Hu Chunhua and governor Zhu Xiaodan.

Wang’s other recent excursions have also been reported in news columns by the state-run news agency Xinhua, under the headings “Wang Yang Activity Reports” and “Important Event Reports.” Wang has made these frequent media appearances just as Occupy Central, a nonviolent movement for universal suffrage in Hong Kong, was about to take place.

Meanwhile Zhang Dejiang, a member of the CCP’s Politburo Standing Committee, the director of the State Council’s Hong Kong and Macau Affairs Office, and a supporter of former CCP leader Jiang Zemin, went to Shenzhen in July this year.

Hong Kong is currently in a critical political situation as its citizens fight to gain universal suffrage for their next Chief Executive election. The media’s different treatment of Zhang and Wang reveals an intense power struggle in Beijing.

Sources have indicated that the faction of the CCP loyal to former Party leader Jiang Zemin is purposely stirring up chaos in Hong Kong to make trouble for the faction loyal to current Party leader Xi Jinping. It has been speculated that Wang is trying to prevent the Jiang faction from further aggravating the situation in Hong Kong.

A source reported that when Zhang went to Shenzhen, he personally summoned and deployed Guangdong underground CCP members and gang groups. He also decided to hold an Anti-Occupy Central parade, which took place on Aug. 17, Jiang Zemin’s birthday.

Zhang’s tactics are thought to be aimed at infuriating the Hong Kong public. Similarly, Zhang helped write the June 10 white paper that angered Hong Kongers by stating that Hong Kong only has as much independence as China is willing to give it.

On Sept. 16, Zhang met with a delegation of the Hong Kong Federation of Trade Unions (FTU) in Beijing. During the meeting, he said the NPC’s decision on universal suffrage has “the highest legal authority” and “cannot be shaken.” Official media filtered out these two sensitive comments.

Shi Cangshan, a China expert based in Washington, D.C., said Zhang’s activity is meant to tear Hong Kong apart, intensify social conflicts in Hong Kong, and challenge the Xi faction, which is in the process of eliminating the forces of Jiang faction.

“When Zhang Dejiang met with the Hong Kong Federation of Trade Unions, the most sensitive remarks were filtered out by Xi authorities,” Shi said.

“This indicates that Xi’s views on political reform for Hong Kong are different from those of Zhang. Officials serving Xi deliberately made the differences public, which is clearly to send signals to the Hong Kong people.”

Zhang and other Jiang faction members have turned Hong Kong into Beijing’s political battlefield. This is causing the Hong Kong pro-establishment camp to fall into an unprecedented split.

For example, Tsang has repeatedly stressed that the central Chinese government should take some responsibility for the failure of the reform package. Elsie Leung recently indicated that the NPC’s decision concerning the nominating committee for the Hong Kong Chief Executive is not unchangeable.