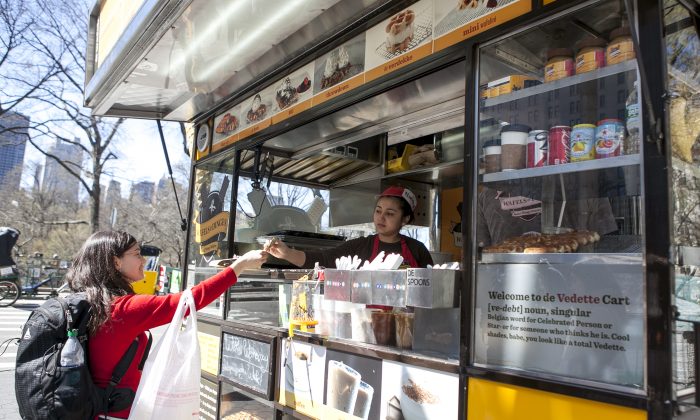 NEW YORK—New York City has a vibrant street vendor scene—you can get anything from a cup of coffee to a cellphone case from these more than 20,000 businesses.

Street vendors in the city vary in size, from small churro stands, to gourmet food trucks. No matter the size though, these street vendors all face the same difficulties while trying to operate in the city: a lack of vending permits, a confusing system of regulations, and heavy fines from the police.

“New York City loves street vendors—it’s a really integral part of our culture and the city. There’s hundreds of thousands of people who get their food from street vendors every day,” said Adam Sobel, owner of the Cinnamon Snail, an acclaimed vegan and organic food truck.

“Our customers don’t really know about the struggle we have as an industry,” Sobel said.

Sobel worked in restaurants for years, but always dreamed of having his own business. Because the cost of opening even a small restaurant is very high, he looked for a more affordable option: a food truck. Sobel and his wife set up produce stands at farmer’s markets to earn start up money.

When they were finally able to get a truck, the couple discovered that receiving a Mobile Food Vending permit to operate in New York City would take years. Without one, they could get arrested for vending in the five boroughs. The Sobels had no choice but to start the Cinnamon Snail food truck in New Jersey. Eventually, they would stumble upon a permit, but not one issued by the city.

“The permits are not available through the city. They can take years to find one. We rent them at about 100 times what the city charges for them through a black market like every other vendor in the city,” said Sobel.

A mobile food vending permit issued by the city costs $200 or less and must be renewed every two years. The city has a cap of 5,100 licenses. Because of this cap, people looking to enter the street vendor business generally need to wait years to get a food license through a lottery. For merchandise permits the cap of 853 means that the Department of Consumer Affairs has not even taken new names for the list since 1992.

Some vendors rent a permit on the black market, which can cost up to $20,000 for a two-year permit, according to Sobel.

Even after obtaining a permit, street vendors still face scrutiny from the authorities. In an average year, there are more than 40,000 tickets written to vendors, and about 10,000 arrests according to the nonprofit Urban Justice Center. Each ticket may cost up to $1,000 dollars. However, according to a 2010 study by the Independent Budget Office, of $15.8 million in fines levied in 2008 and 2009, $14.9 million went uncollected.

Exacerbating this problem is the complicated series of rules that are imposed on street vendors.

Street vendors are not allowed to vend on metered streets, near a building entrance, or close to a crosswalk. Certain streets and sections of the city are blocked off from vendors completely.

“It’s silly that there’s something that you can get permits for—vending food on the street—but you’re not allowed to use it anywhere on the street,” said Sobel.

Despite the challenges, Cinnamon Snail has grown into a successful small business. It has over 20,000 followers on Facebook and more than 600 reviews on Yelp. It was voted a No. 1 place to eat in NYC for 2014 on Yelp, and one of top five most popular food trucks of 2013 on Buzzfeed.

Even as it gathers a larger fan base, Cinnamon Snail still struggles to stay open. Following a surprise inspection, the food truck was shut down this week because of expired vehicle registration.

Sobel said that street vendors face a lot of opposition from business improvement districts that feel like street vendors are an unfair form of competition.

“They don’t realize we have permit expenses, they don’t realize we pay all the same taxes and insurance, workers comp, everything that a normal business does,” he said. “They feel like we’re unfair competition and that we make the streets unsightly, and because of that, they fight to create legislation that makes it difficult for us to co-exist in the streets of the city.”

Sobel said an important first step to resolving the problems facing vendors is to lift the cap on the permits allowed. The revenue from permits will then go to the city instead of a black market. But in the long run, there needs to be changes to the entire system in order for street vendors to truly thrive.

Fortunately, there is now more support for street vendors from advocacy groups. One project that is dedicated to street vendor rights is the Street Vendor Project, which is part of the Urban Justice Center. Members of the project are working on getting the city to pass a law to raise the cap on vendor licenses and permits by raising awareness in communities and among public policymakers. The Cinnamon Snail is one of the participating vendors.

“This is the most disenfranchised, smallest kind of small business in the city that is up against the biggest kind of business interest. We’re being fought against by huge chain businesses that can pump a lot of money into legislation in the city,” said Sobel. “I think if all of our customers realize the struggle we have, they will really support us.”