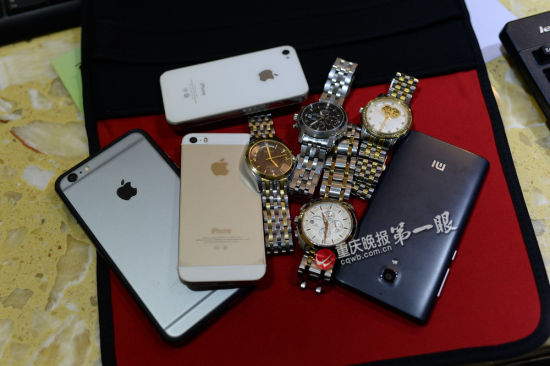 Phones and watches owned by four men who begged money on street in Chongqing City are displayed at the local police station. Four Chinese men begging for money on street were detained by police after a resident reported them for swindling money, on Dec. 6, 2014. (Screenshot/Chongqing Evening News)
China

‘Beggars’ in China Who Own iPhones

On Dec. 6, four Chinese men begging for money on the street in the megacity of Chongqing in southwestern China were detained by police after a local resident reported them for swindling money. Police found that the four “beggars” were not poor at all, and one of them even owns an iPhone 6 Plus, according to state-run Chongqing Evening News.

The four men pretended to be migrant workers who have no enough money to buy train tickets to go home during the New Year, and sought kind people’s help on streets. Some people who sympathized with their situation gave a few yuan to them, while some other residents who suspected them to be cheating reported them to the police.

At the police station, the four men confessed that they are actually farmers from eastern China’s Anhui Province, and they had bought air tickets to Chongqing just to go begging.

They not only wear decent clothes, with classy watches and rings, three of the men have iPhones with one of them having an iPhone 6 Plus released this fall, the report says.

The four men “begged” in Chongqing for eight days, and each of them was able to save 800 yuan ($130) per person besides daily expenses. All of the money was from “begging” on the street.

The news has attracted a lot of discussion on the Internet with the majority condemning the fake begging and lamenting that it has become a quite common phenomenon in Chinese society nowadays. Many netizens expressed their disappointment at the lack of trust and deteriorating moral standards, and some netizens even called for prison sentences for fake beggars.

“Cell phone user” in Haikou City remarked, “Heavy punishment should be implemented for such actions. It makes people more and more indifferent, and people who truly need help are losing opportunities.”

Some other netizens, however, don’t see it as a crime. “There’s no law that bans beggars from taking an airplane and using high-end mobile phones, right?” Net user “Lyhhyh” commented.