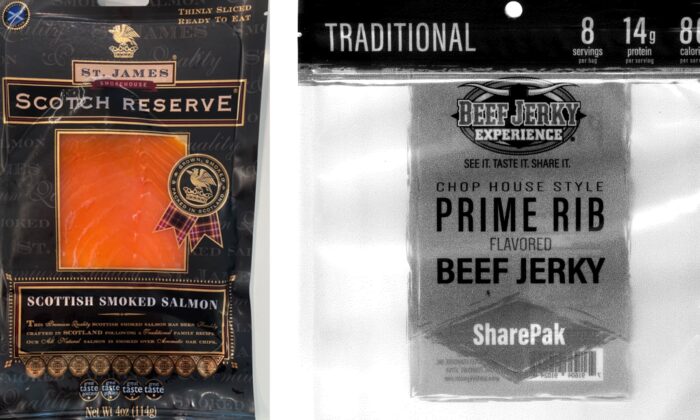 A Tennessee-based company has issued a recall for nearly 500 pounds of beef jerky products due to possible contamination of listeria, according to officials.

The Department of Agriculture’s Food Safety and Inspection Service (FSIS) announced in a Sept. 6 notice that the ready-to-eat beef jerky items were produced on Aug. 25 by the establishment Magnolia Provision and Jerky.

The company is advising consumers to avoid consumption of the Beef Jerky Experience Chop House Style Prime Rib flavored beef jerky that displays an expiration date of Aug. 25, 2023, on the back of the package.

The product was shipped to retailers nationwide and has an establishment number of “8091” inside the U.S. Department of Agriculture (USDA) mark of inspection.

A third-party laboratory discovered the problem when a product contact surface sample returned positive for listeria, the company said.

There have been no confirmed reports of adverse reactions due to the consumption of these products.

Meanwhile, a Florida-based company has voluntarily recalled a smoked salmon product in 10 U.S. states due to possible listeria contamination.

The recall notice noted that this includes Safeway stores in Washington State.

The company said should consumers have products matching the above description and lot number, then they should immediately dispose of the product, or return it to the store for a full refund.

Listeria monocytogenes is a food-borne bacteria that can cause illness with short-term symptoms like high fever, severe headache, stiffness, nausea, abdominal pain, and diarrhea, as per the U.S. Centers for Disease Control and Prevention (CDC).

While it is generally rare and causes a mild infection in healthy individuals, it primarily affects young children, the elderly, or those with weakened immune systems, as well as pregnant women.

In pregnant women, it can potentially cause serious problems such as miscarriages and stillbirths and cause severe disease in the fetus or newborn baby. In adults aged 65 and older and those with weakened immune systems, listeria monocytogenes can in some cases cause severe infections in the bloodstream, such as sepsis, or in the brain, which can cause meningitis or encephalitis.