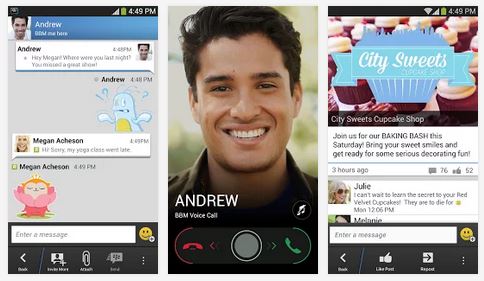 BBM has arrived for Blackberry’s Windows Phone after huge success for Android and iOS.

The messaging service isn’t available yet for Blackberry through public beta but interested people can sign up in the Blackberry Beta Zone and try it out.

The current version has some limitations but is going to get better over time, the company said.

BBM will feature a native Windows Phone UI and have three main sections–contacts, chats, and feeds.

The service has taken off on Android and iOS.

“BBM brings you together in the moment with friends and family through instant chats, voice calls, picture sharing, voice notes and more,” the app’s description says.

It includes the feature of always being on.

The app has gotten good reviews, coming in at 4.2 average.

Out of the approximately 1.7 million reviews on Google Play, for instance, about 1 million are five stars and another 283,939 are four stars.

Then again, some people have complained that recent updates have not gone well and are asking for fixes.

“Profile pics not updating When profile pics are being changed they don’t update on all be contacts. Particularly those that use blackberries, quite weird considering its BBM,” said one.