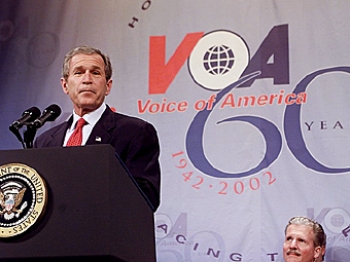 President Bush addresses the audience at the 60th anniversary of Voice of America on February 25, 2002. (AFP/Getty Images)
Opinion

Wang Hua
biggersmaller
Print
As an old saying goes, “Greed makes people stupid, and shortsightedness makes people foolish.” Recent decisions by Eutelsat CEO Giuliano Berretta and some board members of the U.S. Broadcasting Board of Governors (BBG) attest to the truth of that saying.

In June, hoping to win a contract to cover the Beijing Olympics and kowtow to the Chinese regime, Eutelsat discontinued NTDTV’s signal on its W5 satellite, saying there had been a “technical anomaly.” However, despite the fact that the Olympics are fast approaching, Berretta hasn’t met with any of China’s competent authorities, let alone being offered any contracts. Undoubtedly, what Eutelsat has gained is simply a cold shoulder from the regime.

Since canceling its broadcast of NTDTV, the value of Eutelsat’s stock has fallen about $800 million. In fact, its share value had increased over $2.7 billion from the time it was first listed, at the end of 2005, until the time it discontinued NTDTV’s signal on June 16, 2008.

In addition to Beretta’s shameful greed, let’s take a look at the foolishness of the Broadcasting Board of Governors (BBG.) (The BBG is an American body that overseas broadcasting, including U.S. government transmission, on overseas satellites, among other duties.)

In recent years, due to the Chinese regime’s interference, temptations, and machinations, BBG moved the signal of Voice of America (VOA) and Radio Free Asia (RFA) from the W5 satellite to the China-controlled satellite, AsiaSat 3S, at the end of 2007, and has chosen to formally end its contract with Eutelsat on July 31, 2008. That being the case, Eutelsat will have a better excuse to stop carrying NTDTV’s signal on Eutelsat’s W5.

According to feedback form viewers in mainland China, Chinese viewers can pick up VOA and NTDTV with a small satellite dish, 45–75-cm (18–30 inches) because the stations broadcast on the Ku band (Kurtz-under band) on W5. To pick up signals from the C-band of AsiaSat 3S, they have to install a 1.2m (4 feet) satellite dish.

Because the Chinese regime would rather its citizens not get uncensored information from NTDTV and VOA, the regime forces all satellite viewers to register; so the viewers can be tracked and their programming monitored. To get uncensored information viewers must use unregistered dishes; and a four-foot diameter dish is much harder to hide than an 18-inch diameter dish.

Apparently, not only will the BBG’s move cause tremendous damage to NTDTV, but the BBG itself may suffer a huge loss. Once VOA starts transmitting its signal through AsiaSat 3S, it would be easy for the Chinese authorities to terminate, filter, and interfere with VOA’s programs, with all kinds of reasons similar to the “technical anomaly.” This destroys the effectiveness of VOA’s broadcasts, which are created specifically to bringing uncensored news of the world into Asia.

The BBG’s decision is undoubtedly helping the Chinese regime to control VOA, and in turn, the regime will manipulate the BBG, and step by step force it to broadcast only programming acceptable to the communist regime, eventually turning the Voice of America VOA into the “Voice of the Chinese Communist Party” (CCP).

The United States was founded on freedom of belief, democracy, and human rights. To TV viewers in mainland China, NTDTV is like fresh air, their only hope and light under the Chinese regime’s overwhelmingly autocratic control.

As NTDTV is confronted with a relentless crackdown by the Chinese regime, it is a pity that the BBG goes against its nation’s founding principles, and fails to support NTDTV in stopping Eutelsat’s shameful deeds.

NTDTV is a self-financed company, with all the expenses for using W5 covered by the company itself. What the BBG has done is tantamount to aiding and abetting the Chinese regime.

It is not groundless to say that the BBG is helping the Chinese regime to control VOA. If the BBG fails to support NTDTV for fear that it may offend the CCP today, it may sacrifice VOA for its board members’ interests tomorrow.

If the BBG doesn’t want to insist on a bottom line of democracy, freedom, and human rights, it totally subverts the reasons why the U.S. government established VOA. The original objective of establishing VOA was to usher in the hopes of democracy, freedom, and human rights to people who are under autocratic rule. It is indeed lamentable and shameful that the beacon of hope has turned into a minion of the dark forces.

This article represents the author’s personal opinions. The opinions stated herein do not necessarily reflect the official viewpoint of The Epoch Times.Read the original article in Chinese.