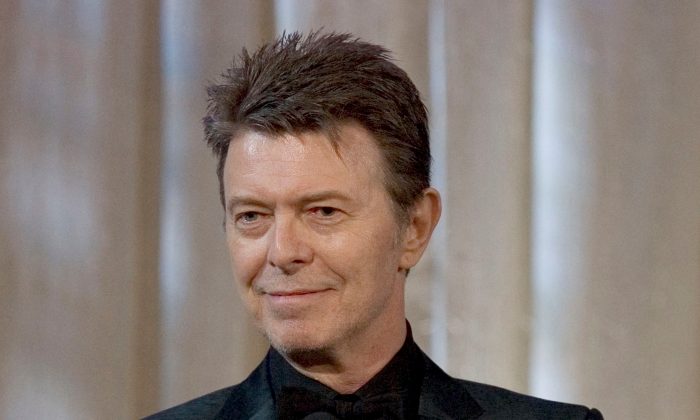 In this June 5, 2007 file photo, David Bowie attends an awards show in New York. Bowie wanted his ashes to be scattered in Bali, "in accordance with the Buddhist rituals" and left most of his estate to his widow, the supermodel Iman and his two children, according to his will filed Friday, Jan. 30, 2016. (AP Photo/Stephen Chernin)
Entertainment

Singer-songwriter David Bowie was unaware he had terminal cancer only three months before his death last year, according to a new report from the BBC.

A documentary from the U.K. broadcaster, “David Bowie: The Last Five Years,” made the revelation about his last days. The documentary airs on BBC Two on Saturday, Jan. 7—just three days before the first anniversary before his death.

In the documentary, Johan Renck, director of Bowie’s “Lazarus” music video, said: “I found out later that the week we were shooting is when he found out that it is over … We’ll end treatment or whatever capacity that means, that his illness has won.”

The “Lazarus” video, which shows Bowie bandaged in a hospital bed, wasn’t about his terminal illness.

“To me it had to do with the biblical aspect of it, you know the man who would rise again, and it had nothing to do with him being ill,” Renck said. “That was only because I liked the imagery of it.”

“David said: ‘I just want to make it a simple performance video,'” he added. The video features Bowie singing lines such as “Look up here, I’m in heaven” from a hospital bed.

His last album, “Blackstar,” was released on Jan. 8—two days before his death. Specifically, he died of liver cancer, and he told friends he was battling the disease in late 2014.

Last year, friend Ivo van Hove told Dutch radio station NOS.nl: “He told me more than one year and three months ago that he had liver cancer, just after he had been told himself. He said that because he knew that he may not always be able to be around.”