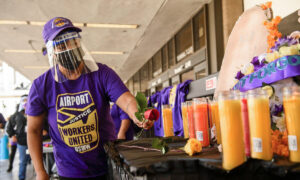 A tractor-trailer on fire is temporarily blocking all lanes on the westbound side of the Bay Bridge.

“Motorists are advised to expect delays and consider using alternate routes,” the alert system stated. “There is no estimated time of reopening.”

People should consider taking alternate routes for the time being.