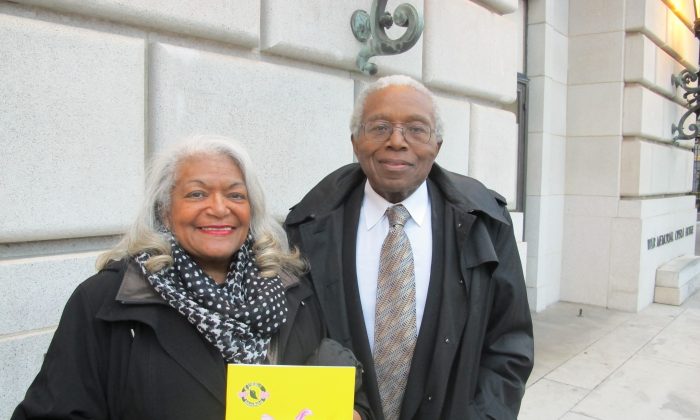 SAN FRANCISCO—It was the high-tech animated backdrop that initially wowed Maurice and Barbara Barron, but by the end of Shen Yun’s performance they were taken by the sense of hope that permeated the performance at the Opera House.

Mr. Barron agreed, “I really enjoyed the entire program … because we both commented on hope while we were sitting there, that is something that it seems that all people need to have.”

Mr. Barron, a retired VP of Safeway, elaborated, “They need to have hope that tomorrow there is a chance that things will be different; there’ll be better tomorrow. Beneath that, you’re going to go through things that perhaps you don’t like at the moment, but there’s always hope that it will be different tomorrow.”

The final scene of the performance, “Hope for the Future,” greatly impacted Mrs. Barron. Shen Yun’s program book explains the piece: “Set in China today, this story revisits an ancient belief—the idea that we all came from the heavens and that, by becoming good, we can one day find our way back home … Just when it seems like all hope is lost, a holy scene appears and a new era begins.”

“That was very impactful,” Mrs. Barron. “We’re all looking for whatever we’re supposed to do at end times; we want that personage to be welcoming. It’s very beautiful. Universal, as he said. We all need that.”

Mr. Barron said the values, culture, and message of hope presented by Shen Yun “absolutely” have a place in today’s society. As does compassion, said Mrs. Barron.

“This [compassion] is what we all fight for; this is worth dying for,” she said. “And we all seem to have an eternal home, and to get there you have to be changed, and it makes it a divinity, so I thought that was very touching that all cultures seem to look for a divine Creator.”