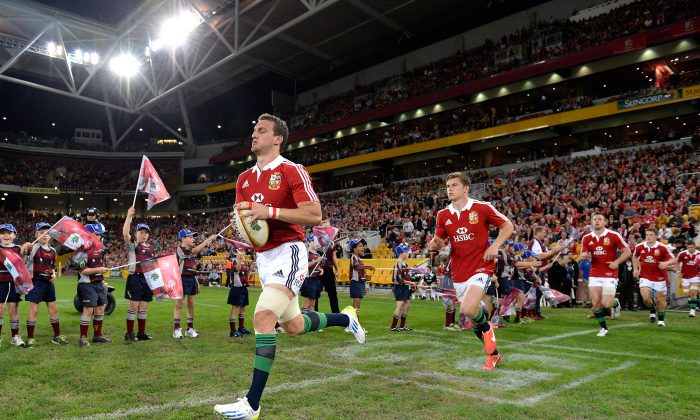 Sam Warburton led the Lions on to Suncorp Stadium to play the Reds two weeks ago ... this Saturday they return to play the Wallabies. (Bradley Kanaris/Getty Images)
International

The powerful British and Irish Lions will start as favourite against the Wallabies in Brisbane on Saturday, despite losing to the ACT Brumbies on Tuesday.

The Lions had been untroubled during their tour matches, beating the state sides, the Force, the Reds, the Waratahs—though they had been hit by injuries.
But master coach Jake White had his no-nonsense Brumbies well-prepared, and they controlled the game from the outset, out-classing the Lions at the line-out and holding their own at the scrum.

White, who won a world cup with South Africa, said this unexpected victory for the Canberra-based team rated as highly. It is the only second victory by an Australian state—the Reds beat the Lions 42 years ago.

Unfortunately, for Australia, the loss will benefit the Lions. Firstly, there is a vast difference in quality between the mid-week side and the Test 23. Secondly, until this loss, the Lions had won easily, so over-confidence was a possibility.

The Test 23 will have experienced the humiliation of defeat and its depressing effect first-hand, watching their team-mates.

They will now know the cost of losing a Lions match—and they will be fired by that basic motivator, the fear of failure.

The loss aside, the Lions are a settled team, on and off the field.

There has been none of the controversy that often plagues big tours—no dwarf throwing, no drunken, marriage-destroying rampages.

On the last tour 12 years ago, there was public discord between the coach and players.

This tour, the worst criticism of the Lions is that they are on-field “cheaters” through off-side play.

Even this is backhanded praise. Only an intelligent team could outsmart the referee, the two assistant referees and the video referee.

In a close Test encounter, intelligent cheating often leads to victory. Such cheating can only take place around the margins of the law, and must look innocently accidental … at worst.

In short, cheating is a difficult strategy that is imposed on top of the game plan, so it requires intelligence, team-work and competence.

Here we meet the Wallabies at their weakest. Their plan is unknown. Their combinations remain untested—except on the training paddock. And their greatest weakness—the lack of an experienced flyhalf—is due to the controversial, non-selection of Quade Cooper.

Coach Robbie Deans and Cooper have had a love-hate relationship, which is now firmly in a hate phase. But Cooper led the Queensland Reds in a spirited challenge against the Lions, showcasing his attacking brilliance.

The non-selection of Cooper has been a flashpoint for the large number of Wallaby fans who want Deans removed.

This had meant the usual excitement about a Lions tour had been tempered by divided opinion about the coach—that was until the Brumbies won national recognition for their historic performance.

Opinion is also divided about the inclusion of fullback Kurtley Beale, who has hardly played this season and who was suspended by his club after alcohol-related incidents, then spent a stint in rehab.

Fans and critics questioned whether alcohol-rehabilitation was a realistic route to the Wallabies, but Deans said that Beale had “presented himself in the right physical and mental shape”.

“If anyone has seen Kurtley play he’s got the fastest reflexes and anticipation in the game,” Deans said.

While public division is clear. It would be likely that similar division exists in the Wallabies—and it is just as likely that some players are anti-Deans.

So, as has happened in the past, Deans has gone out on a limb, backing himself and his still-secret plans, defying not only the odds, but public opinion as well.

The Wallabies often play above expectations, but the negatives in their preparation will be difficult to overcome.

Meanwhile, in NZ the All Blacks play France in the final match of their three-Test series. The All Blacks are 2-0 up after beating France 30-0 last Saturday.

The Lions will play the Wallabies in the first Test at Suncorp Stadium in Brisbane on Saturday night (June 22), kick off at 8:05pm local time.