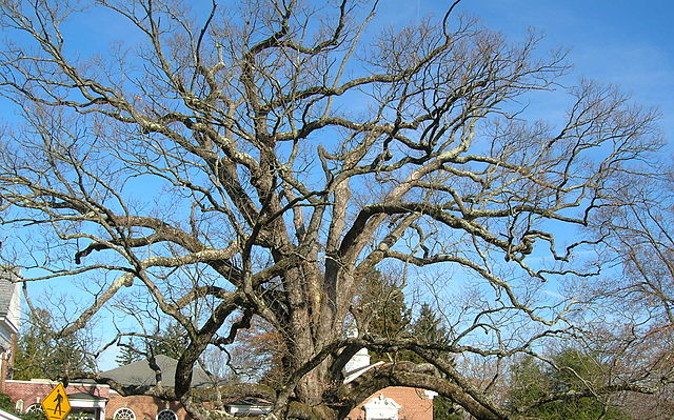 To residents of Basking Ridge, New Jersey, the most beloved icon of the community is an oak tree.

The tree, next to the Basking Ridge Presbyterian Church, also doubles as a grand historic landmark.

In the cemetery surrounding the tree, dozens of Revolutionary War veterans are buried. George Washington himself is said to have rested under the tree with his troops. English evangelist George Whitefield is also believed to have lectured under the tree to a gathering of thousands of during the “Great Awakening.”

The current problem with the oak lies in that the leaves that once decorated its branches are gone. Its branches are now perpetually bare, as seen in the photo above.

On the church’s website, Pastor Dennis Jones writes that the tree has been under the thoughtful care of an arborist, who provides maintenance such as watering, pruning, and PH checking.

Though his care has extended the life of the tree, Jones concedes that the tree’s aging has accelerated of late, and it may be meeting its inevitable end.

“The aging of our oak tree has accelerated over the past 10-15 years culminating in its current condition coming out of the past winter,” Jones said.

“Our church has been blessed by the presence of this grand tree for its entire history — and the whole community is surely rooting for it,” Jones added.

Indeed to members of Basking Ridge, news that the tree may be dying is like hearing an older family member is ill.

“The oak tree is truly a symbol of stability and tradition, ” Diana Boquist, a former township mayor told the Bernardsville News. “It’s interesting to reflect on the history and what the tree has seen and experienced while it’s been there.”

Jones also told the Bernardsville News that the church has been closely monitoring the tree’s health, through means such as soil testing and insect impact.

Though the church accepts that there may be not be a more convincing explanation for the tree’s condition than its longevity, it is “exploring every available option to provide the tree with renewed vitality.”