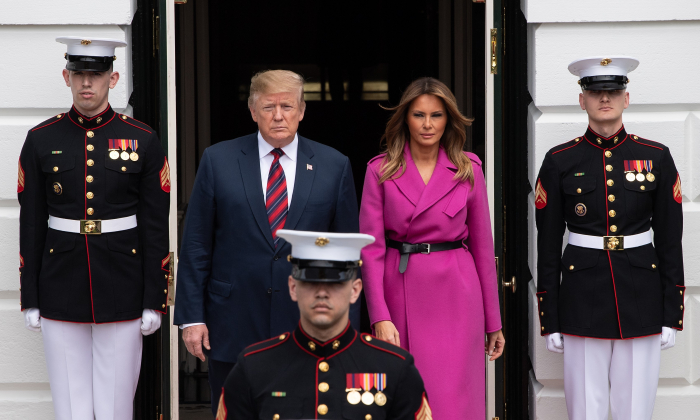 President Donald Trump on April 11 agreed with the testimony of Attorney General William Barr from the previous day about spying on the Trump campaign.

Barr told House lawmakers on April 10 he believes spying on the Trump campaign occurred during the 2016 election. The attorney general said he is looking into the matter in parallel to an investigation by the Department of Justice (DOJ) inspector general.

“I think what he said was absolutely true. There was absolutely spying into my campaign,” Trump told reporters at the White House. “I’ll go a step further. In my opinion, there was illegal spying, unprecedented spying. And something that should never be allowed to happen in our country again.”

More than two years ago, Trump made the initial claim that his campaign was spied on by the Obama administration. At the time, little evidence was available to back up the president’s claim, but investigations by Republicans in Congress have established that the FBI surveilled at least one Trump campaign associate. Further evidence suggests that Obama officials used at least four other methods to spy on the campaign.

Barr told lawmakers he believes “spying on a political campaign is a big deal,” adding that it’s important to examine whether the surveillance of the president’s campaign was adequately predicated. The attorney general also revealed that his inquiry scope includes intelligence agencies beyond the FBI.

The attorney general also hinted that he’s in possession of evidence of spying that is not yet public.

“I believe there is a basis for my concern, but I’m not going to discuss the basis,” Barr told lawmakers.

Barr is the first DOJ official to acknowledge that the Trump campaign was the target of a spying operation. Considering his position as the nation’s top prosecutor, the testimony marks a major turning point for both the public’s perception of the matter and the legal consequences for those involved.

To date, the disclosures about the surveillance of the Trump campaign have largely emanated from political sources, namely Republicans in Congress and Trump himself. As a result, establishment media has dismissed the accusations as political attacks and treated the claims as a conspiracy theory. With the affirmation from the top DOJ official, under oath and before Congress, the evidence will be more difficult to dismiss.

Republican-led investigations in Congress have already established, through documentary evidence and witness testimony, that the process to obtain a warrant to surveil former Trump-campaign adviser Carter Page was riddled with abnormalities. The warrant application omitted the fact that the core of the evidence against Page came from a dossier funded by the Hillary Clinton presidential campaign and the Democratic National Committee. The FBI was also aware, but did not disclose, that the dossier’s author, former British spy Christopher Steele, was biased against Trump.

Carter Page was targeted as part of a counterintelligence investigation of the Trump campaign launched by FBI special agent Peter Strzok in late July 2016. It has since been revealed that Strzok, like Steele, was biased against Trump. In text messages to FBI attorney Lisa Page, Strzok expressed hatred toward Trump, predicted that Hillary Clinton would win the election by a landslide, discussed stopping Trump from becoming president, mentioned an “insurance policy” in the “unlikely event” Trump won the election, and mused about impeachment after Trump’s victory.

While Strzok and others at the FBI ran the legwork of the investigation, the key players operated at the top tiers of government hierarchy. FBI Director James Comey, FBI Deputy Director Andrew McCabe, Sen. John McCain, CIA Director John Brennan, and senior DOJ official Bruce Ohr, among others, played significant roles in the broader alleged operation collectively referred to as Spygate.

“This is not launching an investigation of the FBI,” Barr said on April 10. “To the extent there were any issues at the FBI, I do not view it as a problem that’s endemic to the FBI. I think there was probably a failure among a group of leaders there at the upper echelons.”